Friday, 26 March 2021
0
Robin Whitlock
The UK is about to see the appearance of a new generation of onshore wind turbines – rivalling those in Scotland at Queensferry Bridge and approaching the elevation of the Eiffel Tower – as the country goes all out to achieve its green energy targets. 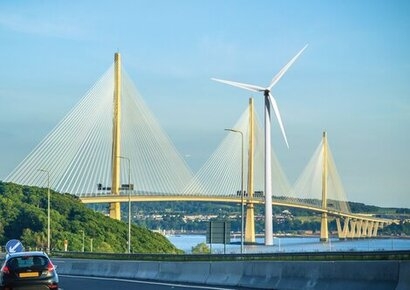 The trend, identified by property experts, results from the national commitment to zero net greenhouse gas emissions by 2050, to be achieved by replacing coal and gas with renewables as fuel to generate power. Wind is the most productive green technology, contributing 24.2 percent of the UK’s electricity last year, up from 19.8 percent in 2019, new BEIS figures show.

Turbines deployed early in Scotland were described as higher than the Statue of Liberty – 93 metres. Reaching 250 metres or more from ground to tip height, the new towers are 43 metres higher than the Queensferry Crossing near Edinburgh, one metre short of the summit of Arthur’s Seat and 50 metres short of the Eiffel Tower.

The end of the Renewables Obligation scheme in 2017 moved the focus of onshore wind from turbines deployed to partially benefit from subsidy payments to those that now look to maximise the generating potential of any site.

The Vestas V162-6.0 MW turbine is taller than two football pitches and produces around 22 GWh a year – enough to power more than 6,150 homes. The offshore version puts out a bumper 80 GWh. Other manufacturers such as Siemens Gamesa and Enercon have their own mega-turbines.

Cheaper than gas, nuclear, coal and other renewables, onshore wind is the preferred choice for new electricity, according to Renewable UK. The wind energy trade group also says the UK’s 11,000 wind turbines, most of them onshore, generate 66m MWh a year – enough to power 18.4m homes and reducing carbon emissions by nearly 30m tonnes a year. Overall, the UK has installed 13.7 gigawatts of onshore wind capacity.

“The maths on wind turbines is relatively simple: bigger is better” said Mike Reid, Head of Utilities at the property consultancy Galbraith. “Specifically there are two ways to produce more power from the wind in a given area. The first is to erect turbines with bigger rotors and blades to cover a wider area, which increases the capacity of the turbine, and the second is to increase the tip height higher into the sky where the wind blows more steadily. That increases the turbine’s capacity factor, which is the total amount of power it produces relative to its potential. The rise in renewables is, in this case, literally all one-way. To create the same amount of power you either have a larger number of smaller turbines or lower number of bigger, more efficient ones. The public mood appears to support the latter, and this also makes sense economically. This explains why we are involved in negotiations with a number of developers about installing up to 250-metre turbines at specific sites in England and Scotland.”

Onshore turbines can prompt concerns over visual amenity, birds, transportation and infrastructure pinch points, and shadow flicker – when rotating blades cause shadows. Yet while not everyone welcomes turbines, wind enjoys up to 74 percent public support according to the UK Government’s own polling. Prior to lockdown, 200,000 people visited Whitelee near Glasgow each year, the largest onshore wind farm in Scotland, whose 215 turbines have a capacity of 539 MW.

As well as the environmental benefits, people see economic advantage in the £35 bn total invested so far in the UK’s 1,500 operational onshore wind farms. They bring jobs and customers to sometimes remote areas as well as ‘planning gain’, whereby developers must spend on social and amenity projects as a planning quid pro quo.

Scotland is the windiest country in Europe with around 25 percent of the continent’s wind resource. We should aim to maximise the potential energy generation from this resource and taller, more powerful, wind turbines are a part of this future, but they must be appropriately sited to generate the power we need while not adversely impacting the natural beauty of our landscape.

Wind power in Europe is increasingly moving offshore, where turbines can be even taller, but there is still a place for onshore wind generation.