US wind generation supplied over 5.5 per cent of the grid in 2016

Tuesday, 07 March 2017
0
Robin Whitlock
New data from the US Energy Information Administration (EIA) shows that wind supplied over 5.5 percent of electricity across the US in 2016, up from 4.7 cent in 2015. 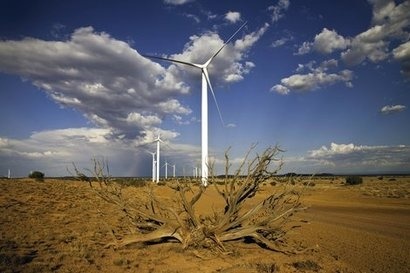 Wind power’s steady growth as a share of the nation’s electricity supply has been accompanied by a surge of investment in rural America with 99 percent of wind turbines located in rural areas. Iowa, South Dakota, Kansas, Oklahoma and North Dakota all sourced more than 20 percent of their electricity generation from wind power during the year. According to the American Wind Energy Association (AWEA), the industry invested over $13.8 billion in new turbines in 2016, in addition to the existing operating fleet of over 52,000 turbines.

EIA’s new data show that wind turbines operating in 40 states generated a record total of 226 million megawatt hours (MWh) during 2016, approximately four times the amount of solar electricity production and approaching what hydroelectric dams generate in America. In Oklahoma, wind’s share of total electricity generation grew from 18.4 percent in 2015 to 25.1 percent in 2016. In Iowa, wind grew from 31.5 percent to 36.6 percent – the highest in the nation – and in Kansas, wind’s share increased from 24.1 percent to 29.6 percent. The Dakotas also saw significant gains, with South Dakota becoming the second state in the country to generate over 30 percent of its electricity from wind energy, and North Dakota rising to 21.5 percent wind.

Other states are close behind, according to EIA. In total, 14 states produced over 10 percent of their electricity from wind in 2016. Twenty states generated over five percent. New Mexico in particular posted impressive generation gains, with the state’s total annual wind generation growing by nearly 73 percent from 2015 levels, bringing the state to a 10.9 percent wind share in 2016.

“Wind is now cheaply and reliably supplying more than 20 percent of the electricity in five states and is a testament to American leadership and innovation” said Tom Kiernan, AWEA CEO. “For these states, and across America, wind is welcome because it means jobs, investment, and a better tomorrow for rural communities.”

Brad Raven, District One Commissioner for Beaver County Oklahoma, added that wind power is cheap, clean and infinite, and it saves Oklahomans hundreds of dollars annually on their utility bills. Mr Raven believes that wind projects are literally saving rural Oklahoma due to the millions in annual royalties received by landowners. As wind power grows beyond 25 percent of the state’s electricity supply, state residents are likely to receive even greater benefits.

The same is true across the US in general and American operators are confident of further expansion of wind power. The Southwest Power Pool, which operates the electricity grid from Montana to the northern tip of Texas, recently exceeded 50 percent wind penetration for a period of time in early February. Bruce Rew, Southwest Power Pool’s Vice President of operations recently stated that the US grid is able to reliably manage more than 50 percent wind generated power, and even that isn’t a likely ceiling.

A 2016 study from the National Renewable Energy Lab found that the Eastern Interconnection, which is the electricity grid comprising most of the Eastern U.S., could reliably and affordably obtain 30 percent of its electricity from wind and solar within the next 10 years using today’s technology and tools.