Monday, 05 March 2012
0
REM
Wind energy broke a record in February in Spain with wind turbines achieing their highest-ever electricity output, generating a total of 4.890 GWh. According to provisional figures from Red Eléctrica de España (REE), wind power was the No. 3 source of energy in the month, after coal-fired and nuclear plants. 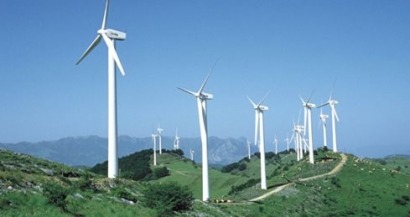 Wind energy's share of demand coverage in February reached 21.7%. This output alone could meet the monthly electricity needs of a country the size of Portugal.

A cold front settled over Europe in the first half of February. Wind power, which is replacing more expensive, fossil fuel-based technologies in the electricity market, helped to keep the average price of electricity in Spain far lower than that of other European countries.  While in the first two weeks of the month the average Spanish electricity market price stood at €51/MWh, in France it was more than double at €105/MWh. Moreover, in the first half of February wind energy accounted for 28.9% of average demand coverage.

The Spanish wind energy industry provides jobs to more than 30,000 people, exports technology valued at more than 2 billion euros annually and eliminates the need for importing 2 billion euros' worth of fossil fuels, helping to offset Spain's current account deficit. The combination of these factors means that for every euro wind energy receives in government incentives, the industry returns three euros to the larger economy.