Thursday, 13 December 2018
0
REM
Spanish company Windar Renovables has brought the manufacturing of wind turbine towers to Russia. The manufacturing plant run by WRS Towers, a partnership including the Russian groups Rusnano MC and Severstal PSJC and led by Windar, has begun operations. It is the first production center for this type of equipment to be established in the country, where an ambitious wind farm installation program is to begin immediately 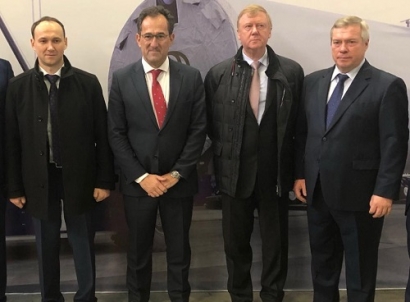 The factory, which is located in Taganrog in Rostov, was opened by the governor of the region, Vasily Golubey, who was accompanied by the Deputy Minister for Industry, Vasily Osmakov.  Both were received by the president of Rusnano MC, Anatoly Chubais, the managing director of Severstal, Alexander Shevelev, and the executive president of Windar Renovables Orlando Alonso.

"The wind sector, in which the Grupo Daniel Alonso has a great deal of experience, has a big future on an international level.  Windar Renovables, which is leading the project with a 51 percent share in WRS, has found the best partners in Rusnano and Severstal, and therefore we expect a lot to come of this union in the future,"  said Alonso.

The WRS Towers plant was built to support a government program for the development of renewable energy. The project was developed based on a Special Investment Contract (SPIC) signed by the Russian Federation, the region of Rostov, Severstal, and WRS Towers, with the support of the Russian Ministry of Trade.

Equipped with Windar technology, which has been tested across the three continents in which this company has facilities, the WRS Towers factory will produce enough towers each year for the installation of up to 300MW, a level expected be reached by the end of 2020. Severstal, will be able to provide the steel plates required for the manufacturing of this equipment at a competitive rate.

In the first phase, the main client will be the Fund for the Development of Wind Energy, created by Rusnano and Pao Fortum through their company OOO Vetroparky FRV, which was awarded tender projects which have a combined capacity of 1.8GW.  The turbine supplier Vestas was chosen by the Fund as a global technology partner, acting as the main supplier of equipment. The awarding of this contract is subject to the existence of a manufacturing program in Russia, which is why they sought the collaboration of Windar Renovables, Vestas' global OEM partner.

"The launch of the first steel tower production plant, one of the key components of the wind turbine, is an historic event for Russian energy and mechanical engineering. This makes us confident that Russia will maintain its status as an international energy power for generations to come,” said Anatoly Chubais, president of Rusnano MC.