Monday, 06 March 2017
0
Al Maiorino
It is evident that when any sort of renewable project is presented, public opposition often follows. Despite the job opportunities, tax revenue and renewable energy the proposed project may bring, protestors dedicate considerable time and effort to halt renewable projects.  Ultimately, these protests make it very difficult for companies to gain approval and move forward with construction. 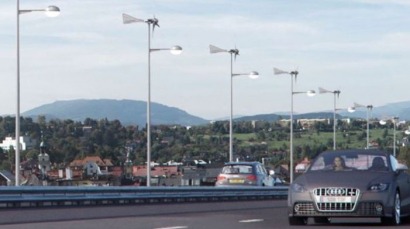 Recently, a unique project in Scotland involving a partnership between a Lanarkshire based IT group and technology specialist, NVT Group, and a green technology innovator, Own Energy Solutions, has received much attention in the media. In a recent article published on NVT Group’s website titled, “Jobs Boost as NVT Group Announces Strategic Technology Deal with Own Energy,” it is established that Own Energy has developed a small wind turbine and inverter system that will generate wind energy using lampposts as hosts.

How will these turbines work? It’s quite simple. With the help of a bespoke inverter, the raw energy produced by the turbines will be conditioned, and then fed directly into National Grid. It is palpable that these turbines will be a cost effective, clean source of energy for the Scotland making way for more projects just like it throughout the U.K. and eventually around the globe.

Accompanying the proposed project, are many enticing community benefits. For example, each suitable lamppost conversion will save a half ton of carbon from being released into the atmosphere. Since there are 10 million lampposts in the U.K. and 20 percent of them are suitable for conversion to wind turbines, it is indisputable that this project has the potential to grow tremendously, and truly make for a cleaner environment.

Additionally, it has been confirmed that the project will make for 25 jobs in the next twelve months, increasing to around 300 within the next three years. It is safe to say that between the amount of money this project could potentially save, and the job opportunities that it will bring, it will make for a more prosperous Scotland, and eventually U.K. as a whole.

Amongst the plethora of benefits associated with this innovative project, it is probable that it will in fact be a success. However, that does not necessarily validate that the disapproval from select groups will not cause delays for the project. As stated above, regardless of however many advantages a project may bring, opposition that ranges anywhere from a few vocal individuals to large organized activist groups is inevitable along the way to implementation. Nevertheless, there are many strategies that can be used to promote a project and move forward with construction.

Creating a Project Specific Website: When promoting any sort of renewable project, it is extremely important that a website (or at least some sort of landing webpage) is put in place. Since the Internet is primarily where individuals turn to, to seek information at their fingertips, it would only make sense that this would be a helpful way to enlighten audiences on a potential project or idea. A web presence permits companies to provide facts, downloadable resources and information that may clarify any misconceptions that spectators may have.

With the creation of a website or webpage there are a few things that should be encompassed to ensure that it is being use as effectively as possible. For instance, companies should include a section that lets residents sign up as advocates for the proposed project, as well as a place where supporters can immediately get involved. A form letter that viewers can sign onto by filling out their contact information, can also make a notable impact on the conquest for project approval. These letters are then automatically emailed to public officials for a steady flow of support throughout the campaign. This feature is a fantastic way to provide supporters with an opportunity to simply voice their support, even while on the go from mobile devices.

Take Advantage of Social Media: As a result of the vast amounts of material being devoured on social network sites daily, it is only palpable that these platforms would make for a suitable outlet for renewable energy companies to endorse a project that is up in the air. In fact, Facebook being the largest platform, has a feature that allows companies to create affordable ads, that can then target specific demographics relevant to their project. Because Facebook ads will automatically appear in users’ newsfeeds, they tend to be extremely influential. Similar to Facebook, Twitter, is another social media platform that allows companies to create ads, and target desired demographics to build a trusted following.

Web Ads: Gaining support for a potential project is challenging, however with the help of web ads it can be made easier. Essentially, by allowing companies to geo-locate target audiences and producing ads that will only reach potential voters, web ads have a high success rate. Typically, they link to the company’s project specific website/webpage. Rather than focusing on page likes and engagement, like advertising with social media, web ads concentrate on click through rates.

The goal of any outreach campaign is to reach public officials on the platforms in which they engage. This means creating calls to action for supporters to tweet their support to public officials, or comment in support on Facebook. Regular advocacy in a coordinated way will provide a strong foundation for when hearings arise, generating earned media along the way. With letter writing drives and testimony at hearings, there will be no question in public officials’ minds as to whether or not support exists in a community for innovative renewable projects such as the generation of wind energy from lampposts.