Wednesday, 28 July 2021
0
REM
A new, $1.5 million Department of Energy grant brings together experts from three institutions to parse the metabolism of a blue-green algae that holds great promise for biofuel production. 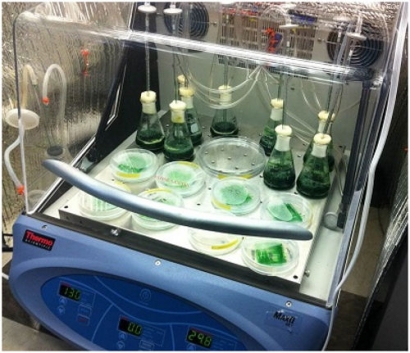 The team, led by Professor of Chemical and Biomolecular Engineering Jamey Young, will take a systems biology approach to identify how cyanobacteria, also known as blue-green algae, can be engineered to produce large amounts of lipids in the form of free fatty acids. Significantly, free fatty acids secreted by cyanobacteria are more easily recovered than lipids typically produced by green algae.

“Lipid-based products that can be converted to biodiesel or other value-added biochemicals represent one of the most promising platforms for petrochemicals replacement,” Young said.

Cyanobacteria are already capable of producing lipids directly from sunlight and atmospheric carbon dioxide using photosynthesis, but not at the rates and quantities necessary to sustain a commercial biofuel process. The goal of this new project is to understand how lipid metabolism is regulated in cyanobacteria so host cells can be engineered for high-yield production of medium-chain free fatty acids, which are readily converted into fuels.

Researchers will use the strain Synechococcus sp. PCC 7002, a fast-growing cyanobacteria that is tolerant to heat and brackish water. The organism’s flexibility makes it especially attractive to DOE as a biomanufacturing host because its growth does not compete with production of crops or other food sources. The species can be grown using wastewater resources and without organic sources of carbon, such as sugar, on land that is unsuitable for agriculture.

Other Vanderbilt investigators are Cornelius Vanderbilt Professor of Biological Sciences Carl Johnson; and John McLean, Stevenson Professor and Department Chair of Chemistry John McLean. Brian Pfleger, University of Wisconsin-Madison, and Doug Allen and Bradley Evans, both of the Donald Danforth Plant Science Center, round out the team.

The research builds on a prior $1.5 million DOE grant, also led by Young, under which the team created research tools for analyzing and controlling cyanobacterial metabolism. “Now the focus is to take the tools we developed and leverage them toward optimizing an important metabolic pathway for producing renewable fuels and chemicals,” he said.

The Young, McLean, Allen, and Evans labs have expertise in measuring metabolic processes using metabolomics and stable isotopes. The Pfleger and Johnson labs are experts in molecular biology and metabolic engineering of cyanobacteria. By combining their research skillsets to identify metabolic control points and bottlenecks in cyanobacterial fatty acid metabolism, the team plans to engineer host cells to enhance lipid production while also boosting cell growth and stress tolerance.

The grant is part of a $45.5 million DOE program to support research geared towards understanding and harnessing nature’s biological processes to produce clean biofuels and bioproducts.

Photo: Cyanobacteria engineered for high yields of a fatty acid are a potential platform for biofuel production that does not compete with food sources and agricultural land.