Avinor and Quantafuel Partner on Production of Sustainable Aviation Fuel

Thursday, 27 June 2019
0
REM
Avinor has entered into an agreement with Quantafuel to buy sustainable aviation fuel based on Norwegian biomass. The fuel will be produced in a pilot plant partly funded by ENOVA. Enova is a Norwegian state enterprise established to help reduce greenhouse gas emissions and strengthen energy security. 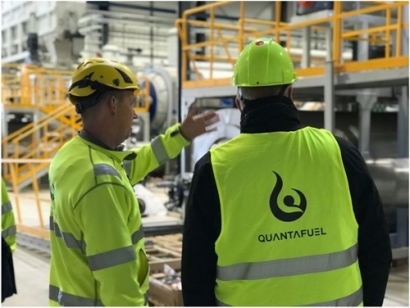 Quantafuel AS has developed technology for the production of liquid fuel from biomass; BtL (Biomass-to-Liquid). The raw material used in production is solid wood in the shape of chips, sawdust and other wood types.

“With the newly concluded agreement, Quantafuel shall establish and produce biofuel based on residues from the Norwegian forestry industry. This focus on biomass would not have been possible without the support of ENOVA and an agreement with Avinor,” stated Kjetil Bøhn, CEO of Quantafuel AS.

In addition to the continuous modernization of the aircraft fleet, jet biofuel and electrification are of key importance in the effort to reduce greenhouse gas emissions from aviation.

In January 2016, Oslo Airport became the world’s first international hub supplying sustainable aviation fuel on a commercial basis for all aircraft refueling there. The project proved SAF can use ordinary logistics and infrastructure for fuel deliveries to airports. In 2017 this scheme was also expanded to include Bergen Airport.

“It is very pleasing that Quantafuel is now taking a new step to contribute to Norwegian resources being used for jet biofuel. The potential is huge and will in addition to the climate impact also form the basis for increased added value and jobs in Norway,” Snekkerbakken said.

In order to fund the development, Avinor has committed to purchasing fuel for NOK 8 million.

The pilot plant that now will be designed and built, will be centrally located in eastern Norway.