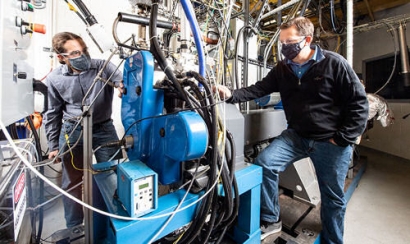 Researchers from the National Renewable Energy Laboratory (NREL) and eight other national laboratories pinpointed 13 blendstocks that slash the carbon content of fuels, with the potential to reduce greenhouse gas (GHG) emissions by at least 60%, as well as be produced at a competitive cost and decrease vehicle operating expenses. The research was led by Co-Optima team members at Pacific Northwest National Laboratory (PNNL).

The Co-Optima collaboration is examining how simultaneous improvements to vehicle fuels and engines can boost energy efficiency and the use of next-generation renewable fuels, while cutting emissions. Ten other NREL researchers contributed to the report resulting from this work.

Much of the Co-Optima research concentrates on components known as blendstocks, which can be produced from a wide spectrum of domestic resources, including renewable biomass—such as forestry, agricultural, and food waste—to cut the petroleum content of fuels. In the recent research, the team focused on blendstocks that could be combined with diesel in mixing-controlled compression-ignition (MCCI) engines to improve cold-weather operability and ensure strong combustion performance, while reducing GHG, nitrogen oxide (NOx), and soot emissions.

Six hydrocarbons and two esters were determined to meet fuel property requirements and have minimal barriers to adoption for use in MCCI engines. One additional ester and five ethers also appeared to have significant potential to reduce emissions but would face possible challenges in areas such as fuel stability and compatibility with vehicle components and fueling infrastructure.

While the NREL team made numerous research contributions to the multistage screening that started with the evaluation of thousands of possible blendstocks, the laboratory took a leading role in identifying top MCCI blendstock candidates in each of the three chemical families. These blendstocks more closely examined by the NREL team were isoalkanes from food waste, 4-butoxyheptane from corn stover, and polyoxymethylene ethers from biomass-, biogas-, or municipal solid waste-derived methanol. The isoalkanes were among the most promising candidates studied, while the other two potential blendstocks evaluated by NREL presented additional challenges to possible deployment.

NREL also assessed the impact of all of the blendstocks on NOx and particulate matter emissions. The larger multilaboratory team looked at factors including cetane number (a measure of how quickly the fuel ignites), cold weather operation, and energy density, and ranked each bioblendstock across 19 metrics indicative of technology readiness, economic viability, and environmental impact.

Read the full report, get more information on Co-Optima activities, and learn about NREL's involvement in Co-Optima and other transportation research.