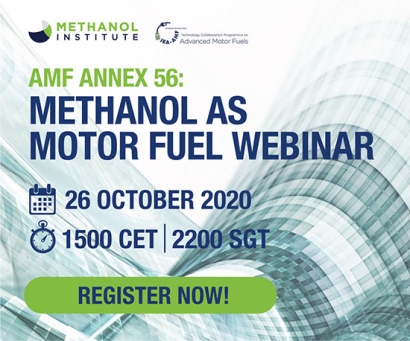 There is a growing need around the world to reduce the greenhouse gas emissions (GHGs) produced by transport, as climate change mitigation gains traction. Improving the energy efficiency of engines isn’t enough and so alternative fuels are needed to greatly improve the environmental performance of different modes of transport.

Renewable transport fuels such as Methanol could become an important solution to combat global warming and air pollution where electrification faces challenges. The chemical properties of methanol allow for a more complete and cleaner combustion which lowers pollutive emissions and improves the efficiency of Internal Combustion Engines (ICEs). When produced f rom renewable pathways, the GHG saving potential of Methanol is considerably high.

Methanol was successfully demonstrated as a motor fuel in the 1980s and 1990s, and there is an ongoing resurgence in interest to utilise Methanol as a fuel in different modes of transport. Today, China is the largest user of Methanol as an automotive fuel and the country has production facilities that can mass produce Methanol vehicles. In Europe, there is growing interest to use Methanol in fuel cell electric vehicles as it is an efficient hydrogen carrier. International shipping is also interested in Methanol as a marine fuel to reduce the environmental impact of the industry. A strong driver of the interest in Methanol as a motor fuel is Methanol engines do not require any special technology. This results in few technical and commercial challenges to the cost-efficient production of Methanol-fuelled vehicles.

The findings of the AMF research will be discussed in detail by the Methanol Institute and AMF in an online seminar to launch the report on October 26, 2020, at 15:00 HRS (CET). It will explore some of the key drivers and triggers to Methanol’s alignment with the energy and climate priorities of today for the automotive industry.

The webinar will feature speakers who are authors of the report from the Danish Technological Institute, German Biomass Research Center (DBFZ), Lund University, and VTT Technical Research Centre of Finland.