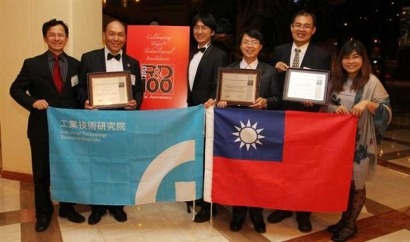 This is the six consecutive years ITRI walked away with awards at the annual event, which recognizes and celebrates the top 100 technology products of the year, and is known informally as the "Oscars of innovation."

“ITRI always pushes the edge of technology, looking at new things and having new capabilities," said Tim Studt, the editorial director of R&D magazine. " ITRI is aware of the market environment and ITRI’s innovation has the market competitiveness of the world.”

Lindsay Hock, the managing editor of R&D Magazine said the institute's wins in multiple categories shows the breadth of ITRI which is different from other organizations."

The two technologies for which ITRI was honored that were not renewables related are nonethless very interesting.

The iAT Technology,  which won in the Electrical Device category, is one of the first see-through display and air-touch input technologies for computers, wearable computers and mobile devices that allows a user's hand to be free of any physical device such as a touchpad or keyboard for touch input.

FluxMerge, which was honored in the Mechanical Systems category, is the only technology that reduces air gap magnetic flux leakage in the magnetic circuit path of all electric machines.

But Paul Livingston, senior editor of R&D Magazine, said he was partial to ButyFix, "which is the chemical innovation that changes the conversion process for clean energy. ITRI has been increasing the practical prospects of their winning technologies over the years.”

In a written statement, ITRI said commercialization of iAT Technology, ButyFix, and FluxMerge is currently underway.

The technologies are available for transfer to companies worldwide. ITRI holds eight patents on iAT technology; four patents and six pending patents on ButyFix; and 19 patents on FluxMerge in Taiwan, China, Japan, Germany, and the United States.