Tuesday, 24 August 2021
1
REM
Ampaire, a pioneer in hybrid electric aircraft technology, has launched demonstration flights between Exeter Airport and Cornwall Airport Newquay this week, to advance the use of sustainable aviation, driving down costs and emissions on short regional routes.  The flights are part of a series of government-backed trials aimed at moving the UK towards green aviation. 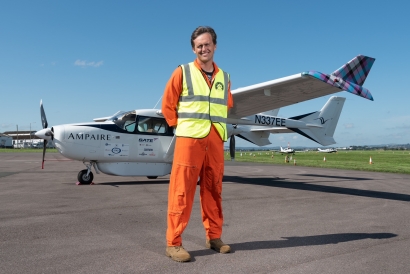 Demonstration flights will be flown by its Electric EEL technology aircraft.  The EEL, a modified US-built six-seat Cessna 337 Skymaster, features a battery-powered electric motor at the front and conventional combustion engine at the rear, enabling a reduction in emissions and operating costs by as much as 30%.The aircraft will fly between these two regional airports, 85 miles apart, on a combination of battery and piston power, collecting valuable data to monitor fuel savings, efficiency and noise.

Stephen Wiltshire, Operations Director, Exeter Airport commented, “We are incredibly excited and very proud to be supporting this initiative and to see Exeter Airport play a central role in demonstrating and developing this important technology.  The future of aviation, as with so many aspects of our lives, has to be sustainable and only through innovation and the commitment of partnerships, such as ours with 2ZERO, can we highlight the potential of this emerging technology.”

Ampaire uses the EEL as an important research and development platform.  It is currently developing hybrid electric power train upgrades for 9- to 19-seat regional aircraft, including the Cessna Grand Caravan and Twin Otter.  It views the near-term opportunity to transform existing turboprop aircraft as the first step to fully electric aircraft, which will become feasible as battery technology advances.

Pete Downes, Managing Director, Cornwall Airport Newquay commented, “We’re passionate about being part of the solution in terms of the sustainable future of aviation and are incredibly proud to be partnering with Ampaire in this exciting project.   At a time when demand for domestic regional travel is stronger than ever, it’s vital we work together to find the most sustainable way to deliver this in the future.”

2ZERO (Towards Zero Emissions in Regional Aircraft Operations) involves the operation of hybrid electric aircraft on regional routes in South West UK, together with a study of the ecosystem required to enable the future of electric aircraft within existing airport and airline operations.

“Low-emission aircraft are vitally needed on short haul regional routes to meet the UK’s net-zero objective for aviation,”said Dr. Susan Ying, Ampaire’s senior VP for global operations. “We are developing commercial aircraft now that will begin this revolution in sustainable aviation with service entry planned for 2024.”

She thanked the UK Civil Aviation Authority for its valued contribution and support of 2ZERO, expediently authorising the test flights this week.

The EEL will be based at Exeter Airport from which it will fly on two CAA-approved routes, taking it over the dramatic expanse of Dartmoor, or on a more southerly flight path along the stunning Devon and Cornwall coastline, before touching down at Cornwall Airport Newquay.

“The EEL flies very much like a conventional aircraft, with some new instrumentation for power management,” said demonstration pilot Elliot Sequin. “We have flown it nonstop from Los Angeles to San Francisco and now the length of the UK without any difficulty. It is the forerunner of a new generation of efficient aircraft that will be easy to fly for pilotsand cost effective for airlines.”

Tags: Hybrid ,Efficiency ,Fuel ,Saving ,Transport
Add a comment
Jessy
Beware of imposters! I was scammed 3 consecutive times, until I found CYBER CREDIT GURU on a blog with positive reviews and recommendations, with faith, sometime last Month, I decided to give them a try, in less than 8 days, everything about my credit report was fixed, my FICO credit score increased from 516 to 801 excellent score. I strongly recommend CYBER CREDIT GURU, they are the best and most reliable credit repair firm. Reach out to them via +1(650) 239 7249 or Email: cybercreditguru(at) gmail (dot) com
pv