BYD puts electric double deckers on to the streets of London

Wednesday, 23 March 2016
0
Robin Whitlock
Chinese battery technology company BYD has designed and developed a number of electric double decker buses for Transport for London (TfL), the first of which is now in operation 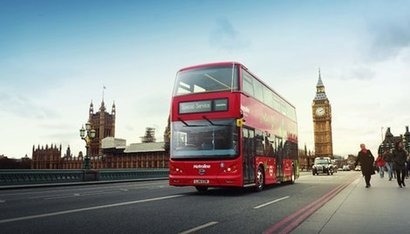 The first electric double decker bus was handed over to the Deputy Mayor of London for Environment and Energy, Matthew Pencharz, by Isbrand Ho, managing Director of BYD Europe at a short ceremony at London City Hall on 16th March. The vehicle is the first of a fleet of five which will shortly be operating on route 98 on behalf of TfL by Metroline via an introduction programme which includes driver training and the installation of fast charging equipment at the Metroline Bus Garage in Willesden, north London.

The vehicle is 10.2 metres long, features full air conditioning and seats 54 passengers with room for a further 27 standing. It is powered by BYD iron phosphate batteries which deliver 345 kilowatt hours of power and can run for up to 190 miles of typical urban driving, according to the internationally recognised SORT test. It takes just four hours to recharge, which can be completed overnight using low-cost off peak electricity.

“The Mayor of London challenged us saying that he did not believe an electric double decker was technically feasible but we took up the challenge and in less than two years created the bus Londoners can see today” said Isbrand Ho, Managing Director of BYD Europe. “This is not a hybrid bus but a totally emissions free product which will give London a world leading position in its efforts to improve air quality.”

Leon Daniels, TfL Managing Director for Surface Transport added that BYD lead the world in electric bus technology and TfL thanks them for making the new electric double decker a reality.

BYD is one of China’s largest companies and has expanded globally in recent years. The company specialises in battery technologies and it has also pioneered technologies in the high-efficiency automobile sector, electric public transport, energy storage, solar power, IT and Original Design Manufacturing (ODM). The company is also the world’s largest manufacturer of rechargeable batteries.