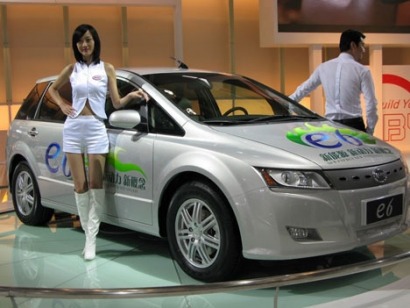 The Chinese government has supported both public and private purchases of electric vehicles with some of the most generous levels of support in the world.

It has also set ambitious sales targets: 500,000 cumulative sales by 2015 and 5m by 2020, contained in the 2012-20 New Energy Vehicle Industrial Plan, released in July this year. Its policy reflects the potential of EVs to reduce emissions, increase China’s energy security and help the domestic auto industry to catch up with, or even leapfrog, foreign competition.

However, Chinese electric vehicles sales have been slow: just 13,000 electric vehicles were sold between 2009 and 2011, including buses and public utility vehicles. Figures for 2012 are not yet available, but are not expected to be orders of magnitude higher.

“China is making a big bet on electric vehicles. But it will need to bring in expertise and technology from foreign players to create competitive vehicles, and to deploy the full muscle of its auto industry in order to produce vehicles the public trusts," said Michael Liebreich, chief executive of Bloomberg New Energy Finance. "If it does this, we could well see sales in 2020 creeping closer to the target and China playing a leading international role. But the chances of China going it alone in electric vehicle, and as a result leapfrogging the world’s auto majors, are looking very slim”.

There are three main factors holding back the Chinese electric vehicle sector. First, on the demand side, consumers have shown little interest in electric cars due to their high cost (despite subsidies), a lack of charging infrastructure and a string of accidents involving these vehicles.

Second, on the supply side, the leading Chinese car manufacturers have not yet put their muscle behind major model launches. They and their fleet customers have been waiting for the government to publish the 2012-20 industrial plan, in order to avoid investing in the wrong technology. The main electric vehicles on the market are produced by second-tier manufacturers, and are not fully competitive alternatives to conventional cars.

Third, and in the long term perhaps more importantly, there is a shortage of the technological expertise in the supply chain needed to produce a competitive, safe, mainstream electric passenger vehicle.

This technological expertise will take time to develop. The early adopters will be public fleets, where purchase decisions for buses, taxis, commercial and utility vehicles are decided, or at least heavily influenced, by the government.

Private purchases will initially be limited to very low-end, compact vehicles – city cars – where consumer requirements are more modest. Under current policies, we forecast under our optimistic scenario that the cumulative sales of these segments will amount to 343,000 by 2015 and just over 1m by 2020. The latter figure would be equivalent to just 20% of the official target.