Monday, 13 July 2020
0
REM
Governor Ralph Northam has announced that Virginia will invest $14 million from the Volkswagen Environmental Mitigation Trust (VW Trust) to replace all-diesel cargo handling equipment at the Port of Virginia with zero-emission all-electric equipment, and $20 million to fund the Clean Air Communities Program to electrify government fleets across the Commonwealth. 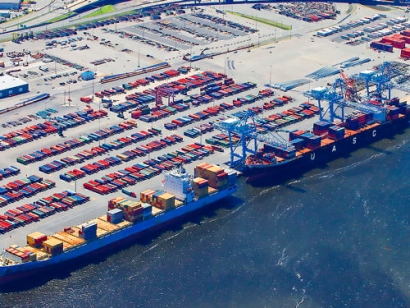 “As we continue to fight this global pandemic, we are reminded daily that we must prioritize public health in every way possible,” said Northam. “With this initiative, we will electrify operations at the Port of Virginia and drive the much-needed transition to clean transportation across our Commonwealth. Together, these projects show how we can make critical investments in the health and wellbeing of all Virginians while advancing our commitment to a clean energy future.”

Attorney General Mark Herring, said, “These projects at the Port of Virginia will further cement its position as the premier facility on the East Coast, and the transformation of government fleets will set an example for both the public and private sectors as we seek to reduce emissions in the transportation sector.”

This is the fourth funding allocation that Virginia has made from the Volkswagen emissions settlement through a state mitigation plan. The Department of Environmental Quality (DEQ) is the designated lead agency acting on the state’s behalf as beneficiary to distribute Virginia’s share of $93.6 million from the settlement.

Last year, Governor Northam announced approximately $20 million from the VW Trust for an electric school bus initiative and $14 million to fund the deployment of electric transit buses. In 2018, the Governor allocated $14 million to develop the Commonwealth’s electric vehicle charging network.

The Port of Virginia project will use $14 million in VW Trust funds, which are managed by the DEQ, and $10 million contributed by the Port of Virginia to deploy two all-electric ship-to-shore cranes at Norfolk International Terminals (NIT). The new cranes will support a terminal optimization at NIT moving from a predominantly diesel-powered operation to an electrified operation supported by electric and hybrid electric cargo handling equipment. The funding will also support the initial deployment of all-electric yard tractors and charging infrastructure at the Richmond Marine Terminal (RMT) to evaluate this technology for future use at other terminals in Hampton Roads. The Port Virginia currently operates more than 160 diesel yard tractors.

“At every opportunity, we are looking for innovative ways to build environmental stewardship into transportation infrastructure development across the Commonwealth,” said Secretary of Transportation Shannon Valentine. “This partnership is a sound investment in the Port of Virginia, our environment, and the economic future of all Virginians.”

Virginia will also dedicate up to $20 million of VW Trust funds through a competitive application process for public electrification projects. All state and local government entities are eligible and can apply for funding to support projects that serve the public and replace diesel vehicles with zero-emission, electric vehicles.

The Clean Air Communities Program will begin accepting applications later this summer. The program will be administered by DEQ. Priority will be given to projects located in low-income communities, communities of color, and communities listed on the U.S. Environmental Protection Agency’s 2020 Diesel Emissions Reduction Act Priority List.