Nawa Technologies says its ultracapacitors will revolutionise the cost, efficiency and capability of IoT devices 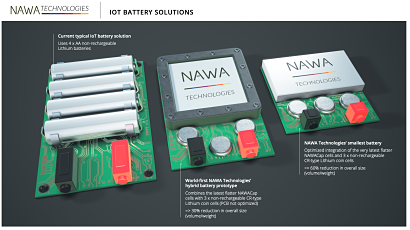 As the world becomes more connected, IoT devices can be found in billions of products. They play a crucial role in our daily lives, from bringing added convenience in domestic applications, like

wifi-enabled electrical appliances – such as smart metres – to improving the quality of our food by monitoring its condition during transportation. Constantly tracking factors like pressure, location, proximity, smoke, gas and light, IoT devices can be found everywhere from our homes to extreme environments including deep under the sea or at altitude in aerospace.

Thanks to this wide variety of applications and usage conditions, the number of IoT devices across the world is expected to grow exponentially, from 25 billion in 2020 to 80 billion before 2030. This creates major challenges around performance, raising the question of how to power these devices – and to do so efficiently, cost-effectively and with minimal environmental impact.

“Many IoT devices spend most of their lives on stand-by, requiring a low amount of energy” said Ronald De Graaf, Sales Manager for IoT at Nawa Technologies. “But when the device needs to send a signal a short burst of energy is required. For example, in the oil and gas industry, when a transfer of pressure data is sent from a drill on the sea floor to a rig on the surface. If you then combine the long-term energy requirement with a remote location and extreme environment, an energy solution that is only based on a conventional battery is just too large and expensive. Our concept is the hybridisation of our NawaCap ultracapacitors with conventional batteries, resulting in the perfect solution for these applications, reducing size and improving performance.”

IoT devices use many types of battery technologies, from non-rechargeable primary batteries such as regular AA or AAA alkaline to lithium primary cells to rechargeable lithium-ion batteries, but the need to provide repeated power bursts for transmission limits their lifetime, causing early failures or heat problems in the circuitry. Lithium is also a finite resource and has issues around recyclability and safety.

Greener solutions, such as energy harvesters – for example solar power, or systems that use kinetic energy or salt water to generate energy – can supply a sensor with low-level ‘standby’ energy but not the short bursts of energy required for data transfer.

Based on carbon, Nawa Technologies’ NawaCap ultracapacitors use a material that is abundant, recyclable and environmentally friendly. They can be packaged into small, flat cells and withstand extremes of temperature and the harshest environments, through deep sea to deep space. They also match ideally with the IoT sensor power use profile, coping with high current peaks, combined with long lifetime and therefore do not need to be replaced.

“Combining our NawaCap ultracapacitors with a lithium cell, creating a ‘hybrid’ battery, has many advantages” added Mr De Graaf. “If we take a GPS tracking device as an example, often used to track valuable assets or integrated into the collar of a pet, the conventional approach is to use a non-rechargeable AA lithium battery, but this is very bulky. Integrate NawaCap and you could immediately reduce the reliance on lithium AA to AAA-sized batteries with superior performance, including the same or even an extended operational lifetime. One could also combine NawaCap with a coin cell resulting in an even flatter, lighter package with even better lifetime.”

Nawa Technologies’ core market is the production of its next-generation ultracapacitor cells. With development completed, and 13 million euros funding already raised from historical and new investors end of 2019, the company is to begin the mass production phase over the coming year. A first of its kind cell production line will be installed at its Provence facility and, at full production, Nawa expects to achieve a capacity in excess of one million cells per month.

In addition to the IoT markets, these cells will be first used globally in a wide range of electrical systems including power tools and automated guided vehicles.

Other key markets are the automotive industry in hybrid cars, battery electric vehicles (BEVs) and fuel cell vehicles (FCEVs) where NAWA Technologies can, for example, rapidly store (and deploy) energy from regenerative braking systems, greatly increasing energy efficiency. With the global market for ultracapacitors estimated to grow to 2-3 billion euros in 2023, the company believes it is ideally positioned to take advantage of increased demand.