Tuesday, 02 January 2018
0
REM
A team of researchers at the International Institute for Carbon-Neutral Energy Research (I2CNER), within southern Japan's Kyushu University, have created a device to store energy in chemical form through continuous electrolysis. 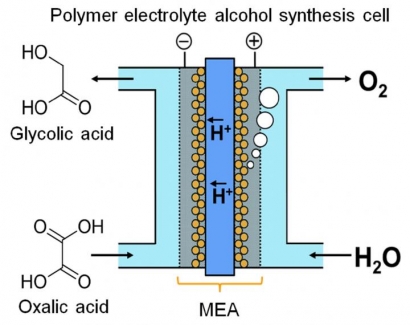 The researchers noted that glycolic acid (GC) has a much greater energy capacity than hydrogen, one of the more popular energy-storage chemicals. GC can be produced by four-electron reduction of oxalic acid (OX), a widely available carboxylic acid. As described in their publication in Scientific Reports, the team devised an electrolytic cell based on a novel membrane-electrode assembly. Sandwiched between two electrodes are an iridium oxide-based anode and a titanium dioxide (TiO2)-coated titanium (Ti) cathode, linked by a polymer membrane.

"Flow-type systems are very important for energy storage with liquid-phase reaction," study lead author Masaaki Sadakiyo explains. "Most electrolyzers producing alcohols operate a batch process, which is not suitable for this purpose. In our device, by using a solid polymer electrolyte in direct contact with the electrodes, we can run the reaction as a continuous flow without addition of impurities (e.g. electrolytes). The OX solution can effectively be thought of as a flowable electron pool."

Another key consideration is the cathode design. The cathodic reaction is catalyzed by anatase TiO2. To ensure a solid connection between catalyst and cathode, the team "grew" TiO2 directly on Ti in the form of a mesh or felt. Electron microscope images show the TiO2 as a fuzz clinging to the outside of the Ti rods. Its job is to catalyze the electro-reduction of OX to GC. Meanwhile, at the anode, water is oxidized to oxygen.

The team found that the reaction accelerated at higher temperatures. However, turning the heat up too high encouraged  the conversion of water to hydrogen. The ideal balance between these two effects was at 60°C. At this temperature, the device could be further optimized by slowing the flow of reactants, while increasing the amount of surface area available for the reaction.

Even the texture of the fuzzy TiO2 catalyst made a major difference. When TiO2 was prepared as a "felt," by growing it on thinner and more densely packed Ti rods, the reaction occurred faster than on the "mesh" - probably because of the greater surface area. The felt also discouraged hydrogen production, by blanketing the Ti surface more snugly than the mesh, preventing the exposure of bare Ti.

"In the right conditions, our cell converts nearly 100% of OX, which we find very encouraging," co-author Miho Yamauchi says. "We calculate that the maximum volumetric energy capacity of the GC solution is around 50 times that of hydrogen gas. To be clear, the energy efficiency, as opposed to capacity, still lags behind other technologies. However, this is a promising first step to a new method for storing excess current."