Monday, 16 October 2017
0
Dan McCue
Swiss company Climeworks, developers of direct air capture (DAC) technology, has partnered with Reykjavik Energy (OR) on a power plant confirmed to produce “negative emissions.” Earlier this year the company made history with the world's first commercially-viable DAC plant near Zurich which filters 900 tons of CO2 from the atmosphere and supplies it to a local greenhouse 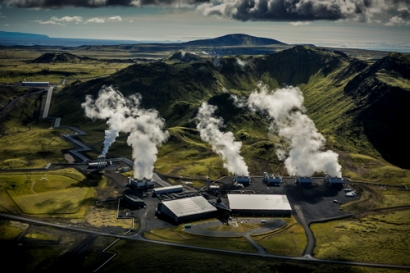 As part of the CarbFix2 project Climeworks will demonstrate a safe, economically-viable and highly scalable carbon removal technology. This type of solution has been recognized as a crucial component in efforts to achieve global warming targets. The EU-backed collaborative research project centers around one of the world’s largest geothermal power plants in Hellisheidi, Iceland, where CO2 is currently injected and mineralized at an industrial scale.

Since 2007, scientists have collaborated with Reykjavík Energy’s experts, technicians, and tradespeople on developing the idea and implementation of fixating CO2 into basaltic rock around the power plant.

A Climeworks DAC module has been installed on-site to capture CO2 from ambient air for permanent storage underground, thus creating a carbon removal solution which some scientific studies indicate is essential to achieving the two-degree climate target. Carbon negative solutions are also likely to be a key theme at the UN Climate Conference, COP 23, starting in Bonn in November.

A testing phase has begun during which the CO2 is captured from ambient air, bound to water, and sent to more than 700 meters underground. There the CO2 reacts with the basaltic bedrock and forms solid minerals, creating a permanent storage solution.

“The potential of scaling-up our technology in combination with CO2 storage, is enormous. Not only here in Iceland but also in numerous other regions which have similar rock formations. Our plan is to offer carbon removal to individuals, corporates and organizations as a means to reverse their non-avoidable carbon emissions,” said Christoph Gebald, Founder and CEO at Climeworks.

Edda Sif Aradóttir, CarbFix project leader at Reykjavik Energy, added, “By integrating the Climeworks and CarbFix technologies we create a solution that is deployable where we have basalt but independent of the location of emissions. This is important to scale up the CarbFix approach on a global level.”

CarbFix2 has received funding from the European Union’s Horizon 2020 research and innovation program and is led by Iceland’s multi-utility company Reykjavik Energy. It is based on the original CarbFix project, initiated in 2007.  Further partners to CarbFix2 are The University of Iceland, CNRS (Toulouse, France) and Amphos 21 (Barcelona, Spain).