Wednesday, 22 February 2017
0
Dan McCue
New York City's iconic St. Patrick’s Cathedral on Tuesday activated a massive geothermal plant installed beneath it, just one of a series of significant upgrades the historic edifice is undergoing in this its 136th year. 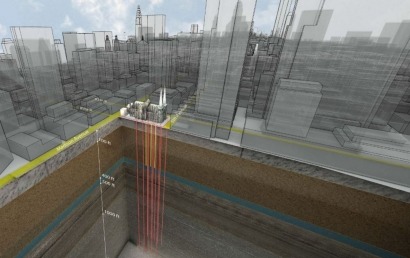 The $177 million renovation of St. Patrick's Cathedral is the most extensive it has undergone in its history. The four-year project was not expected to be completed until December, but workers are ahead of schedule and most of the project will likely will be finished later next month.

The Archdiocese of New York said Tuesday that its embrace of renewable energy is part of an effort to adapt the landmark to the structural and environmental standards of twenty-first century urban life.

Monsignor Robert Ritchie, the cathedral’s rector, said the project is consistent with the church’s mission.

“A consistent ethic of life does not compartmentalize these issues. It prioritizes life and the preservation of life at every level.  One of the most basic ways in which we are called to do so is through responsible stewardship of our natural resources,” Monsignor Ritchie said.

He also said the archdiocese wants to lead by example. The high profile installation comes at a time when there's much uncertainty over the future of renewable energy development in the United States in light of President Donald Trump's vow to increase fossil fuel production and roll-back longstanding environmental protections to foster coal, oil and natural gas development.

Neither Ritchie nor the archdiocese made any comment on Trump's policies in announcing the activation of its the geothermal plant.

The engineering plan for the plant was carried out by the cathedral’s design team, Murphy, Burnham, & Buttrick, Landmark Facilities Group, and PW Grosser, who developed and repurposed the existing infrastructure to harness renewable power from an underground system of wells.

That power will be then be used to regulate the temperature of the cathedral and adjoining buildings with increased efficiency and a considerable reduction in CO2 emissions, the archdiocese said in a news release.

“At the outset, we evaluated a conventional HVAC system, but determined it would pose too many challenges for this historic building,” said Richard Sileo, senior engineer with Landmark Facilities Group.

“We conducted a feasibility study and found that a geothermal system let us meet our goals with the smallest impact,”  Sileo said.

Work on the project commenced in June 2015 with the drilling of a series of wells on the north and south side of the cathedral.

The geothermal plant is comprised of 10 wells dug to a depth of 2,200 feet. Four of the wells run along 51st Street, while the other six run along 50th Street.

The heart of the system is a bit of technology called a "dedicated heat recovery chiller," which extracts thermal energy from the underground system of wells and distributes it throughout the campus for heating and cooling purposes.

This is accomplished through a standing column hybrid open loop system. While a description of an open loop system can get quite technical, at its most basic it is a system in which an input alters the output, but the output has no feedback loop and therefore no effect on the input.

Structure Tone worked with Lane Associates to oversee the installation of the heat pump, as well as the sophisticated distribution network of heat exchangers, air handlers, and fan coils that extract and redirect heat through the 76,000 square feet of space.

While most geothermal plants alternate between their warming and chilling functions, this plant is designed to automatically split its cooling and warming functions in order to simultaneously heat or cool the diverse areas it services.

St. Patrick's Cathedral is widely considered the symbolic seat of the Catholic Church in the United States.

Pope Francis did visit the cathedral in Sept. 2015, when he prayed the Evening Prayer at a Vespers service following an appearance before the UN.