Turboden  to Supply  29MWe Geothermal Plant for EDC in the Philippines

Monday, 08 February 2021
0
REM
Turboden, a subsidiary of Mitsubishi Heavy Industries, Ltd. based in Lombardy, Italy, and Mitsubishi Power, Ltd. have jointly received an order for 29-MW binary cycle power generation equipment to be installed at the geothermal power plant operated in Palayan, in the southeastern sector of Luzon Island in the Philippines, by Energy Development Corporation, a local geothermal company. Turboden will provide the complete power generation system, and Mitsubishi Power will provide support through its local resources. The order calls for project completion and operation startup by the end of 2022. 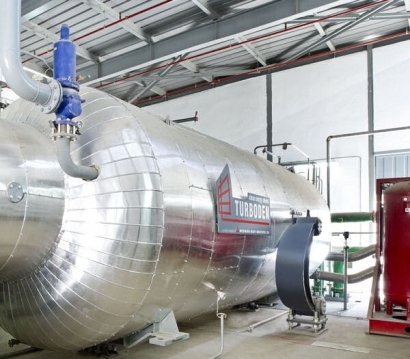 The power generation system to be provided by Turboden will add new binary cycle geothermal power equipment, whose key component is the company's proprietary 29MW ORC (Organic Rankine Cycle) system, to the existing 120MW flash type geothermal power plant owned and operated by Bac-Man Geothermal Inc. (BGI), an EDC power subsidiary. The new system will generate power making effective use of brine, which until now has merely been returned to a reinjection well. By replacing power in the power grid now derived from fossil fuels, etc., the new installation will enable reduction of CO2 emissions derived from steam power.

This project has been selected as a project for the Financing Program for Joint Crediting Mechanism (JCM) Model Projects in FY2020 administered by Japan's Ministry of the Environment and its execution body, the Global Environment Center Foundation (GEC). In addition to helping to curb CO2 emissions in the Philippines, the project will contribute to Japan's attainment of its CO2 reduction target.

The new 29MW binary cycle power generation configuration is expected to trim CO2 emissions by approximately 72,200 tons per year (equivalent to some 20,000 hectares of forest). Mitsubishi Power will dispatch personnel to the site to offer installation guidance and handle domestic transport, etc. through MHI Power (Philippines) Plant Services Corporation, its local subsidiary which has a robust track record in constructions of geothermal and steam power plants as well as provision of power solutions.

Thanks to its numerous volcanic islands, the Philippines ranks fourth worldwide in volume of geothermal resources, after the United States, Indonesia and Japan. The country also ranks third, after the United States and Indonesia, in geothermal power generation capacity. In terms of equipment capacity (development ratio) as a proportion of resource volume, the Philippines ranks highest worldwide, and the country is an aggressive developer of geothermal power in the global context also.

With the new binary cycle geothermal power generation to derive from the introduction of ORC technology under this project, additional excavation is unnecessary. As the brine from the existing geothermal power system can be used to generate power, introducing ORC technology into geothermal power plants, including the many facilities already developed in the Philippines, means that brine previously discharged can be used as an effective heat source, enabling its use as a readily available carbon neutral power source.

The key component of Turboden's binary cycle power generation equipment is an ORC (Organic Rankine Cycle) turbine that uses low-boiling-point organic matter (fluorocarbon, hydrocarbon, etc.) as the boiling medium. The generation system can use relatively low-temperature heat sources such as biomass, factory waste heat and geothermal energy. This equipment can generate up to 40MW of power and can be easily installed outside fuel-producing regions or at inland, desert or island locations lacking water resources. Power can be generated stably, without interference from weather factors.