A First in South Africa for Green Hydrogen

Tuesday, 22 March 2022
0
REM
The work of the South African Institute for Advanced Materials Chemistry (SAIAMC) at the University of the Western Cape (UWC) has played a key role in the recent successful implementation of a green hydrogen production project in the Western Cape. 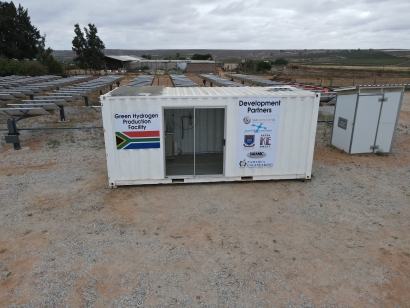 UWC, through SAIAMC partnered with a joint venture consisting of Keren Energy, Sakhumnotho, Cape Stack and Namaqua Engineering, as the lead technology and skills development partner on a green hydrogen proof of concept (POC) project in Vredendal. The project is among the first in South Africa to demonstrate the feasibility of producing green hydrogen using solar energy as the energy source.

The site has a 100 kW photovoltaic solar system installed and this renewable energy will be used primarily to produce green hydrogen. The hydrogen generated will be used in various industrial applications and, ultimately, in fuel cell vehicles of the future.

Keren Energy, a renewable energy company with a solar, biomass and hydro energy focus, has a Memorandum of Understanding (MOU) and a joint development agreement with Cape Stack, a hydrogen electrolyser and fuel cell stack production company – which, in turn has a technology development partnership with SAIAMC at UWC.

As a successful bidder in the South Africa’s Department of Energy REIPPP programme, Keren Energy is proving to be a valuable strategic partner with an established network of industrial partners in the green energy production space.

The engineering partner on the 100kW project is Namaqua Engineering, a Vredendalbased firm.

The hydrogen production system used on this project was extensively tested and validated at the SAIAMC facility before it was integrated, jointly with Cape Stack, at the Namaqua Engineering facility in Vredendal.

Preparing graduates with updated skills for roles in a new energy environment is crucial as we enter an era of embracing cleaner, greener and more sustainable energy production systems.

Skills development programs in the traditional energy sector have demonstrated the value of on-site experience through hands-on apprenticeships and similar initiatives over the last 50 years.

The Vredendal project and others like this, provide a good platform and outlet for SAIAMC’s human development programme through which graduates from Universities of Technology (UoT) and Technical Vocational Education and Training (TVET) colleges with an NQF level 5-6 are exposed to the most important aspects of the industrial working environment.

The program is specifically designed to improve the employability of our youth for the upcoming energy market. The extensive network of more than 50 industrial collaborators, ranging from large- to micro-sized enterprises, puts SAIAMC in a unique position where the imbalance between knowledge and skills is addressed. The success of this programme hinges on a continuous engagement with industrial partners, such as Keren Energy and Cape Stack and alignment with the local business needs.

In this particular instance the Vredendal project provides a real-world scenario for practical training with SAIAMC utilising the site for human development through which graduates and other energy professionals can be exposed to a working green hydrogen project.

George van Rensburg, Managing Director of Keren Energy speaks enthusiastically about their association with SAIAMC on the Vredendal project.

“Working with UWC has added tremendously to the success of the project. The relationship has resulted in a number of synergies between the private and academic sector and believe the future requires more of these collaborations.

"Having Dr. Chidziva and the rest of the SAIAMC team on board has given us a tremendous sense of certainty, knowing that we have access to some of the most experienced South African minds in the field.

"It is a challenge for energy tech start-up companies to access accredited skills and field experience in a relatively young sector. SAIAMC provides us with the guidance and leadership required to make such projects a reality,” adds van Rensburg.

With world-leading solar resources, vast open plains and being home to 75% of the world's platinum group metals (PGMs), South Africa has a significant advantage in the production potential of green hydrogen. Ensuring the development and protection of intellectual property, technology transfer and project management skills, are all essential elements that complement these natural advantages in a South African context.