Thursday, 28 April 2022
0
Robin Whitlock
Following a three-month feasibility study, Aviation H2 has selected the use of liquid ammonia to turbofan combustion as the best route to carbon-free flight and will soon start modifying turbofan engines to test and prove the concept. 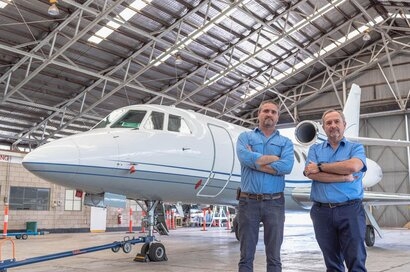 After launching a capital raise, the company says the results from their studies were very positive. Their research shows that converting a Falcon 50 to Liquid Ammonia Turbofan Combustion is the most efficient and commercially viable avenue to building a hydrogen-powered plane.

The company’s team of world-renowned engineers say they now have a clear pathway to having Australia’s first hydrogen-fuelled aircraft in the skies by the middle of 2023.

“By implementing this power path, Aviation H2 can fly aircraft with hydrogen fuel using significantly less weight than alternative power paths while generating the same amount of power” said Aviation H2 Director, Dr Helmut Mayer. “There are multiple reasons why liquid ammonia was selected. Chiefly its advantages include high gravimetric and volumetric hydrogen density that makes it lighter and easier to transport while providing a greater energy conversion rate. In fact, the stored weight of liquid ammonia energy is substantially lighter than gaseous hydrogen and can be kept at a much lower tank pressure.”

Dr Mayer added that this is supported by anhydrous ammonia reaching liquification point quicker, which makes it a lot simpler to store when compared to liquid or gasified hydrogen.

Additionally, worldwide transportation and handling of liquid ammonia has been around for many years, making ammonia as a carbon-free fuel even more appealing.

Turbofans are a widely used type of jet engine that are known for their high fuel efficiency. When liquid ammonia is fed into the combustion chamber, the turbofan can produce the same amount of thrust as traditional fuel sources.

The company has also selected the Dassault Falcon 50 business jet – a long-ranged international business charter jet aircraft – for the flight test. This is due to the jet having three engines, of which only two are required for flight, allowing the third engine to be used to test a smaller engine modified to use liquid ammonia before moving on to modify the main engines.

Falcon 50s also have a larger weight capacity, reducing the risk posed by weight challenges. The costs for the test programme are no larger than when using a smaller and newer type of jet.

They are also relatively common in Australia, meaning there is a time-saving in getting the aircraft ready for testing.

The company believes making use of current technologies and infrastructure will be important to future customers because it allows them to modify the aircraft they have already invested in, rather than buy a whole new fleet.

Once the test flight is successful in the middle of 2023, Aviation H2 will have a patentable method for modifying aircraft so they operate on carbon-free fuel. They will quickly seek to certify and commercialise this product via a planned public listing on a major exchange in Q4 of 2023.