Renewable Energy In Russia: An interview with Vyacheslav Solomin 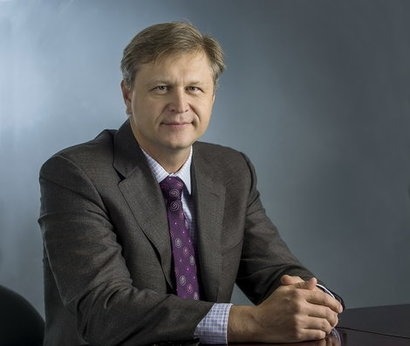 In late 2015, Russia’s largest privately-held energy company EuroSibEnergo (part of En+ Group) launched Siberia’s largest solar power plant in Abakan, Republic of Khakassia. Abakan boasts more than 310 sunny days on the average over a year, thus making a vast solar potential available for generation of energy sufficient to meet 1/30 of the Abakan city’s total electricity demand using the clean renewable energy source. Alternatively, the city would have had to burn around 5,000 tons of coal annually emitting over 8,000 tons of greenhouse gases to generate the same amount of electricity at a coal-fired power plant. EuroSibEnergo spent $8 million on this project and plans to expand it in the future.

The solar power plant has been running for 2 months now so REM talked to Vyacheslav Solomin, CEO of EuroSibEnergo to find out more about the plant and the Russian renewable energy sector in general.

Tell me more about EuroSibEnergo and En+ Group and what they do?

EuroSibEnergo is the energy part of the En+ Group, Russia’s leading energy and industrial group. We are the largest independent electricity producer in Russia and one of the Russia’s leaders in clean energy generation. We provide about 8% of electricity in Russia, or about 80 TWh annually.

From climate side, Russia is an ideal place for generating clean energy. Abundant hydro resources and sun-reach areas open a lot of opportunities for ‘green’ energy companies. We’ve taken this opportunity to launch a pilot project of a 5.2 MW-solar farm in Siberia in 2015.

Now we are thinking to expand hydropower and solar power projects in remote Siberian areas.

Can you tell me more about renewable energy in Russia and how the sector is doing over there? What are its main drivers?

The main source of renewable energy in Russia’s energy mix is hydropower. We have about 50 GW of installed hydropower capacity what makes up over 20% of the total installed capacity; its annual production is about 180 TWh. In 2014-2015, over 1 GW of new hydro capacity was put into operation.

We have not too much solar and wind power capacity in Russia as of now. Solar generation is about 450 MW while is less than 50 MW. Most of solar and wind power plants were launched in last 3 years following  Russian government’s call to introduce renewable energy . This sector is relatively new and is only developing in Russia. Among the main drivers that push renewables’ growth is the government’s incentive to put Russia in line with other countries actively utilizing green energy. . The government has a subsidy system encouraging business to go greener: they sign contracts with energy companies for electricity supply what guarantees return on investment. The government also conducts auctions for companies to invest in solar, wind and small hydro.

As I’ve mentioned, our company invested in a 5.2 MW pilot solar plant in Siberian city of Abakan with the plans to expand it at some point. Other companies are building larger solar plants, from 15 MW to 40 MW in different regions but we wanted to build a small one to see how it works in Siberia.

President Putin originally appears to have been skeptical of climate change but recently changed his mind on the issue. How has this change of stance impacted the Russian renewable energy sector?

The government now is playing a more active role in promoting cleaner energy thanks to their subsidy program and support mechanisms.

There are heated debates going on in Russia about potential introduction of carbon tax as a tool to encourage the shift from fossil-fuel to renewable energy. If this happens it will boost the development of the Russian renewable energy sector and will speed up closure of old coal-fired power plants that were built 40-60 years ago.

But it is important to understand that many of the coal-fired plants produce both electricity and heat. Heat is vital in Russia’s mostly cold climate, so solar and wind power plants will not be able to replace coal in full.

Has Russia established any climate change/renewable energy targets as the US, the EU and other regions have done?

By 2030 we want to be 25% below 1990 emission levels. Many companies are now working towards that goal.For example, Russia’s RUSAL, the world’s second largest aluminum producer, has reduced its greenhouse gas emissions by 54% since 1990 with hydro energy constituting over 90% of its aluminium production.

EuroSibEnergo used to have emissions of 30 million tonnes of carbon dioxide back in 2000, but now we’re down to less than 16 million for the past 15 years. So I think we’re pretty much on track.

Regarding hydropower, are there any concerns that this sector will increasingly be adversely impacted by climate change? For example, in some South American countries reservoir levels are falling because of soaring temperatures

Yes, this is the second year of low water in Russia, especially in Siberia. It happens in many countries, such as Brazil. Noone really knows the reasons behind this phenomenon. We don’t understand either whether it’s due to climate change or not.

We have recently launched a joint research together with Russian scientific institutes into key factors that affect water levels in Siberia and in the Baikal Lake. It may be air pollution in Asia or some other factors that impact the precipitation.

If hydropower largely remains untapped in Siberia, what plans are in hand to exploit this resource in the future?

Russia has the second largest hydropower resources in the world, of which only 20% is currently being used while this figure varies from 50% in the rest of the world to 90% in Switzerland. The vast majority of Russia’s hydropower potential is concentrated in the eastern regions of the country. We see the potential to build up to 30 GW of new hydropower generation capacity in these sparsely populated areas. The new annual production of carbon-free energy could reach as high as 150TWh.

We are also trying to make water use more efficient and currently upgrading the equipment at our existing hydropower plants to boost their efficiency. By 2018 this will allow us to increase annual production by 1.5 billion kilowatt hour.

As I’ve mentioned the expansion plans, EuroSibEnergo has two green-field projects in hydropower in the development. One is in the Irkutsk region called Telmamskaya hydro, which will be about 400 to 500 MW. The second one is a bigger project, Nizhne-Angarskaya hydro with 1100 MW, near Krasnoyarsk. We expect the plant will be a part of an industrial cluster, including an aluminum smelter and other power-intense production facilities. That should also replace coal generation in the region that adversely affects Siberian environment.

Tell me more about the joint venture with China Yangtze International

We have established the JV with Yangtze International in 2011. Since that time we’re closely working with them. Among the potential projects Yangtze will be involved in is Telmamskaya hydro power plant and Nizhne-Angarskaya hydro . Yangtze might serve as a co-investor and a supplier of equipment and engineering solutions.

Tell me more about the Abakan solar plant? Are there any more plants of this size (or larger) planned for the near future?

The Abakan solar plant is pretty much a pilot for us. We are considering the extension of the project up to 50 MW. At the moment it covers 18 hectares but the total land plot is 80 hectares so there is enough room for growth. We’ve already built all of the networks and connections. Siberia generally has a very continental climate: it is cold but sunny in winter and in summer. The particular place we chose to build this power station has over 300 sunny days, it opens up a huge potential for the expansion of the solar farms further in the area. The low temperatures don’t really affect solar panels, it’s purely a matter of the number of sunny days. The local governments welcomed the construction of the plant as it’s a big step towards greener Siberia with less hazardous emissions.

How attractive is renewable energy generally among the Russian population? Is there a thriving rooftop solar panel market for instance?

I can’t say Russian people are as supportive of renewable energy as they are in the west as the industry itself is only fledging here. But there is an interesting observation that residents of remote regions are starting to buy Chinese-made rooftop solar panels. Recently we had a conference on renewables here in Russia and one of the speakers said shepherds in Asian Russian regions who  used to buy diesel generators, now buy solar power sets for 2 kilowatts that cost about  3,000  dollars. So there is a place for renewables, but people just have to see the potential. It might be expensive per kilowatt, but the whole set is not that expensive and therefore is a good investment.

Has Russia begun investing in onshore and offshore wind yet and if so to what extent?

There are some plans proposed by many companies, including ourselves, but now the only onshore wind project under development is 50 MW wind park in Russia’s Ulyanovsk built by Finnish energy producer Fortum. One of the reasons behinnd wind energy generation’s low popularity in Russia is its high price and the difficulties related to receiving government subsidies for wind plants. In order to be eligible for subsidies, energy companies should have at least 70 percent of the power plant’s equipment produced in Russia. But since the demand for wind plant equipment is not big enough, the producers don’t invest in the production of wind turbine powers and other accompanying equipment. It results in a lack of home-made equipment and inability to get government subsidies. If there are no subsidies, energy companies will hardly afford such projects. That’s why wind in Russia is not really going anywhere. We should have a big investor who would invest into at least a 500 MW wind project, that would bring the equipment producers onboard. There is a kind of a circle situation with that.

Does Russia have any plans to begin transforming electricity grids in order to enable further integration of renewables, as western countries are doing? For example by investing in energy storage, energy efficiency, and smart grid technology etc?

Yes, there are some plans, and some companies are researching this. Our company is researching the accumulation and the potential for smart grids but it’s not there yet. The distributed generation is not developed enough. Once there is more natural gas, more distributed generation and more renewables, the smart grid technology will become more applicable. Now it’s in a research and development stage.

What do you expect the Russian renewable energy sector to look like in say ten years’ time?

I think the renewables sector will growwith less input from the Russian government. As the technology gets cheaper, it will become more popular among the people who install solar panels on rooftops. A lot of industrial companies are now investing in energy saving technologies.

Cogeneration will be another trend and a major driver for renewables’ rise. Up until now, energy has been fairly cheap in Russia so people didn’t care, but now it is getting more expensive, industrial companies are trying to think of various ways to keep their costs down and to save as much energy as possible.

In Russia, over 150,000 of people are employed in the coal industry Coal generation is gradually shrinking all over the world as there are greener types of energy emerging. That being said, all of these people have a risk to lose their jobs if we don’t find the ways how to process coal without so much greenhouse gas emissions. Government, business and scientific community should act together to come up with innovative and economically viable ways of coal processing and producing chemicals out of it. En+ Group, a parent company of EuroSibEnergo, is among Russia’s most vocal advocates for creating a carbon-free zone in Siberia and shifting to coal burning to coal processing.