The Energy Sector Redefined: An interview with Thomas Birr of innogy Innovation Hub 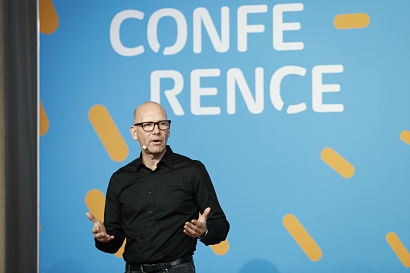 innogy Innovation Hub is a VC/accelerator that invests in and mentors disruptive technology startups that have the potential to shape the energy system of the future. To date, the Hub has mentored and invested in 80+ startups and built a portfolio valued at 150 million euros. They’re not just focused on energy tech startups, but invest in a broad range of IoT, blockchain, AI, cybersecurity and machine economy based technologies that they believe could fundamentally transform how energy is consumed and distributed. It’s funded by innogy SE, the German energy company.

REM talked to Thomas Birr, the company’s CEO and also its chief futurist and SVP of Innovation & Business Transformation, during his visit to London in early November, about how he sees the energy sector being fundamentally redefined by decarbonisation, decentralisation, digitisation and democratisation and how we need to rethink our current approach to meeting carbon emissions targets.

Can you tell me more about Innogy Innovation Hub

I’ve been in the energy business for almost 30 years now, 20 of which in the utilities business. I joined RWE in 1999, was in a number of corporate positions in RWE and the grid and I was Managing Director and CEO of RWE’s daughter companies in integrated energy companies. Innogy is a spin-off of RWE, basically a blueprint for the utilities of the future. Innogy is RWE’s renewable generation business with 22 million customers in 12 countries and is also the company’s intelligent distribution grid business. In 2016 I dropped all my corporate positions and concentrated on leading the Innogy Innovation Hub.

innogy Innovation Hub consists of 60 people in Tel Aviv, London and Berlin and our mission is searching for new business models which have the potential to replace or even disrupt our present core business. We are achieving this through three business models. First of all we are a company builder – we found and form start-ups ourselves and put them into competitive environments and try to make them capital market ready and grow them. Secondly we run accelerator programmes in London or in the US. The third, maybe most important one, strategic investment in fast-growing technology companies.

We have a strong focus area. We go beyond energy, clearly, but we have a strong focus on four focus areas which we call the ‘Lighthouses’. The first is ‘Smart & Connected’ which focuses on the digitisation of day to day lives, environments and workplaces. Secondly, ‘Machine Economy’, which is driven by the idea of not only knowledge economy communicating devices but devices and machines embarking on a self-sustaining parallel economy. This is where ideas like blockchain kick in. The third one is Cyber Venture, where start-ups provide improved cyber resilience to decentralised energy systems. The fourth one, which is closest to our core business, is ‘Disruptive Digital’ which looks at the disruptive business models that have the potential to disrupt or even destroy the classic value chain of energy.

Do you focus on the global energy sector or looking at particular countries?

At the end of the day, we need to help the marketplace we are in, which is continental Europe and the US, but we also search for new ideas in the places where innovation is really happening. So that is in London, in Silicon Valley, in the San Francisco Bay area and Tel Aviv, and we try to make these technologies available, sooner or later, in our core business. On top of that, we have intense networks on the global level, so our programme which we run from the US, which is called ‘Free Electrons’ is a combination of ten global utilities on a non-competitive basis. The idea is that everyone puts in a basic amount of, say, $200,000 on the table, we run a competition once a year and invite, on a global level once again, start-ups that are in energy to apply for a programme. Normally, we receive between 400 and 500 applications from all over the world and we choose the 12 to 20 best ones. Then we run them through three modules, all over the world, and bring them in contact with a huge number of customers, extending to 150 million customers worldwide. That is a huge test for young emerging companies to try out whether their ideas are marketable, whether they can contribute to the value chain.

How would you say the energy sector is being fundamentally redefined?

I think there are three areas that really matter. The first two are already here and no-one questions them anymore, which is decarbonisation and decentralisation of the energy world. What we see for example in Germany, is that 35 percent of the power production and power consumption is already renewable, so the shutdown of coal plants and nuclear power plants in Germany, that is already happening. That goes along with the decentralisation – we are progressively moving away from the model where we have central production.

Now we have a bi-directional flowing energy system with decentralised consumers who are also producers. The next two are digitisation and democratisation of the energy system. Digitisation is the most important driver for the energy information to happen. We have all the technology already in place right now. We have CO2-free generation technologies like solar and wind, which are already on the threshold of competitiveness with fossil fuels, that is already there.

The biggest driver, that is really making this happen, is digitisation. We’ll be applying artificial intelligence in the network, because the network will become far too complex for human brains to operate and understand. With decentralised swarm intelligence, we will embark into a world where the energy world is not a bespoke model anymore but a neural network of consumers and prosumers which have to constantly take decentral decisions – do I buy, sell, store – with our swarm intelligence systems. It is unthinkable with the architecture we see today. From a centralised operation, we will see decentralised decision making, supported by digitised energy technology, from blockchain to artificial intelligence, augmented reality and all that.

When I say there is 35 percent of renewable energy in Germany, that means there is still 65 percent of fossil fuel that we need to keep the lights on and that will be the case from some years to come. We have to keep that in mind. It is the challenge to politics and to society to manage this transformation and transition. In my view, what we need to do is to continue consciously managing this transition, keeping aware that coal will come to an end. No one challenges that anymore, not even the industry itself. The challenge is how to manage the next 10-20 years in that way. The renewable energy and the transmission lines that are needed to make that happen don’t appear overnight.

How do you see Britain’s progress in comparison to what’s happening in mainland Europe?

Britain very early on tackled its energy system. The move to offshore wind was a bold move over the past 20 years which we highly admire, which we were happy to contribute to. We aim to be the biggest foreign investor with our wind parks and, overall, the UK roadmap with regard to pushing forward offshore wind is remarkable and exciting. Every nation in Europe has its energy challenges. The UK challenge is to move from gas-fired plants to renewables in future.

innogy Innovation Hub believes that new technologies, business models and consumption patterns will redefine the energy market of the future. The company believes that this future will be driven by four core global trends; decarbonisation, decentralisation, digitisation and democratisation. innogy Innovation Hub’s mission is to drive this vision for the future of energy by being a sector disruptor: by identifying the game-changing technologies, ideas, individuals and businesses that will help build that future, wherever they are, providing funding, mentoring and a platform for co-creation, collaboration and convergence.

To this end, innogy Innovation Hub has created a 150 million portfolio through investing in disruptive individuals, start-ups and early stage businesses and provided opportunities for 80+ start-up and scale-up companies to collaborate. It has innovation teams in Silicon Valley, Tel Aviv, London and Berlin and is funded by leading German energy company innogy SE, with revenues of around 43 billion euros (2017), more than 42,000 employees and activities in 16 countries.