The "Greening" of Professional Sports: An Interview with Kristina Gregory of Constellation

Thursday, 28 February 2019
0
Dan McCue
Headquartered in Baltimore, Maryland, Constellation, a subsidiary of Exelon, provides electric power, natural gas, and energy management services to about two million customers across the United States. One of the most interesting aspects of its business has been Constellation's decades-long commitment to fostering renewable energy and its strategy of working with professional sports teams to "green" their events, revamp their facilities and turn their efforts into narratives they can use to both burnish their corporate images and pass the lessons of their experiences on to their fans. 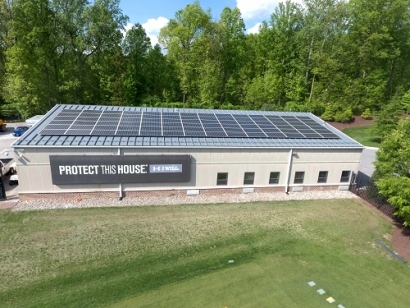 The initiative began with Constellation being named the official energy provider of Chicago's United Center, home to the NBA's Chicago Bulls and the NHL's Chicago Blackhawks.

The next year, the company partnered with the Pittsburgh Steelers and Heinz Field, designing, developing and maintaining the central energy plant serving the 65,000-seat stadium.

The same year, Constellation was named official energy provider and sustainability partner of the PGA of America. In this role, the company has worked with the PGAA to conduct energy efficiency analyses and recommend an actionable sustainability strategy and energy management program for the organization.

In August 2018, Constellation finalized an agreement with Comcast Spectacor, owner of the Wells Fargo Center, to introduce a 100 percent renewable energy supply to the arena, and just this past January, it announced that it has been named the official energy provider of the Pro Football Hall of Fame and the Johnson Controls Hall of Fame Village, an $889 million expansion project of the existing HOF facility.

Recently, Renewable Energy Magazine spoke to Kristina Gregory, Constellation's vice-president of marketing, communications, corporate sponsorships and events, to find out a bit more about all of this.

REM: Constellation has a long history of involvement in renewable energy. How did that commitment start?

Kristina Gregory:  Constellation entered the renewables space in 2007 with the launch of its solar business. In the time since, our distributed energy portfolio has grown to approximately 484 MW of generation, including solar, battery storage, fuel cells and cogeneration.

Along with that, we're constantly looking at how you take that commitment and partner with customers to extend these efforts even further. And the partnerships I'm talking about extend from our big commercial customers to our residential customers.

REM: Now, you are headquartered in Baltimore, and I know you've done some work with the local NFL franchise, the Baltimore Ravens ... did you dip your toe into the sports industry pool with them, or did something occur before that project?

Kristina Gregory: It was before that. The first project was actually with the United Center in Chicago. This was back in 2011 and it was the first time that we really sat down and started talking about how you make the games green, how you bring energy efficiency to a big sports venue ... and out of that process we became the United Center's official energy provider for the Chicago Bulls and the Chicago Blackhawks.

As part of that we came up with a concept called "Go Green Games" and energy tips and other initiatives to educate fans about how to use energy responsibly and how to incorporate energy efficiency into their daily routine.

From there we began to look for more sports partnerships and right now, we've got five major sponsorships. You mentioned the Baltimore Ravens, and of course, they are our hometown team, so it is exciting to be working with them, and in 2016, we installed a solar project at their headquarters and practice facility in Owings Mills, Maryland.

That was particularly exciting because that solar project offset about 15 percent of the headquarters' electricity needs and gave us a great opportunity to talk to about the benefits of solar and energy efficiency and so forth in a way that engages consumers and businesses.

REM: Can you tell me more about the "Go Green Games"?

We donate Green-e Energy Certified Renewable Energy Certificates to match the electricity used on each game day. These RECs certify that 100 percent of the energy used during Go Green Games will be matched with wind generation to reduce carbon dioxide emissions.

REM: So it's clear that there are two things going on in your efforts. There's the greening of business, the sports franchise, and there's the educating of their fans and other area businesses ... but I'm wondering, how exactly do you make a big sporting event, like a professional basketball game or a professional NFL game on Sunday, truly greener?

Kristina Gregory: I think that this is what has been so interesting for us. Many of these sports leagues and teams have sustainability goals and they're looking at upgrading facilities and considering how you do that in the most sustainable and cost-effective way possible. And there are all kinds of ways to do that, right? It comes down to considerations like, "What kind of lights do you use in the stadium?" "What kind of lights do you use in the scoreboard, and, for that matter, how do you power the scoreboard?" Then you've got lighting controls and sensors and boilers and chillers. ... So you're looking at this architecture, some of which has never been looked at from an energy efficiency perspective, and figuring out how to do things better.

At the same time, you have facilities like the Wells Fargo Center, in Philadelphia, where the Flyers and the 76ers play. They decided to make all of the games at their facility green. So through ourConstellation Offsite Renewables product, they were able to purchase a 100 percent renewable energy supply for their arena ... and that's enabled us to talk to other businesses and explain how, through a power contract, you can drive your consumption to 100 percent renewables.

And I think there's something for fans to understand there too. By using the Constellation Offsite Renewables product, Wells Fargo is preventing the emissions of more than 14,000 metric tons of greenhouse gases annually. And when we talk to fans we explain that's equivalent to eliminating the emission from 4,000 cars annually. it's something they can readily understand and relate to.

REM: Could you explain how the Offsite Renewables product works?

Kristina Gregory: Sure. Basically, it's a retail power contract and it's structured in such a way that they can show their customers and shareholders exactly where they've purchased renewable energy from. It allows them to say, this is the facility that the green power is coming from.

REM: How many sports facilities are you involved with today?

Kristina Gregory: As a provider of both energy and sustainability solutions, we are active in 14 professional and collegiate athletic facilities via our various sports partnerships. We have also done efficiency work with 15 golf courses through our partnership with the PGA of America and supply power and gas to 55 of its member courses nationwide.

REM: Incidentally, it's nice to hear that the Steelers and the Ravens, rivals on the field, are both committed to sustainability and renewable energy.

Kristina Gregory: [Laughs]  The rivalry between the teams makes for some interesting days around the office.

REM: Having now done so many of these projects,  do you see any commonality in the interests of these franchises? I mean, are they, as a group, more apt to embrace solar than another renewable? Are they more interested in energy efficiency than renewable energy?

Kristina Gregory: I would say it depends on the individual facility, where they are in terms of upgrades, and the message they want to communicate to their fans. However, I will say we're in an era now where companies want to take their commitments to the next level; they actively pursue ways to incorporate more renewables into their energy portfolios and they want to talk about it, communicating what they've done and why they've done it, to their respective communities.

REM: You announced your involvement with the Pro Football Hall of Fame right before this year's Super Bowl. Tell me about that project.

Kristina Gregory: This is really exciting to us. We were just named the official energy provider of the Pro Football Hall of Fame and the Hall of Fame Village, which is a giant expansion project of the existing facility and we're been working with them to bring on an energy expert to figure out how they can not only reduce their carbon footprint, but also how to implement ongoing energy efficiency strategies that won't just save them money over time, but will also enable them to educate their fans about the benefits of energy efficiency. As this facility and village grows, we will grow with them and continue to provide them with expertise about how they can build on today's efforts in the future.