Monday, 23 January 2012
0
Dan McCue
While wind and solar power dominate the headlines when American television and newspapers turn their attention to renewable energy, the biggest trend in the sector actually involves materials that are far less high tech and quite a bit more mundane – municipal waste, and discarded food and yard refuse. 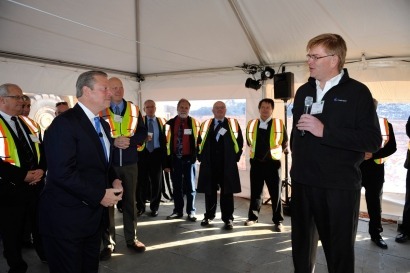 Among the fastest growing companies in the space is Waltham, Massachusetts-based Harvest Power, which now operates organics-to-waste facilities in the US Northeast, Midwest and along the west coast, as well as in Ontario and Vancouver, Canada.

At the same time, its business model also includes a highly profitable organic fertilizer and soil improvement line made from the residuals of its anaerobic digestion-based process. Along the way the company has been named to the Cleantech 100 of top global cleantech companies, designated “Emerging Company of the Year” by the New England Clean Energy Council, and a recipient of an SBANE 2011 New England Innovation Award.

REM recently caught up with company CEO Paul Sellew to discuss the company’s processes and its prospects for the future.

Sellew has been a leader in the US organics industry for more than 25 years. In 1982 he founded Earthgro, Inc., which grew to be the second largest producer of compost-based lawn and garden products in North America.

Paul also served as a senior executive with Synagro, Inc., helping to build it into the leading organics residuals management business in the US.

I’ve heard of people trying to remove organics from the municipal solid waste stream, but what really intrigues me is the fact that you’re actually getting two products in one…

Well that’s true, we do get two distinct products from our process, and both grow out of our desire to get something meaningful out of the waste we generate in our society. Today, yard and food waste that could be serving a better purpose is still largely ending up in landfills.

What we do is take these materials, and, through a very safe process called anaerobic digestion, we create biogas that can we then turn into electricity, thermal energy or compressed gas – a transportation fuel.

Once we do that, we then take the residuals from that process and put it through additional steps to turn it either into a pelletized organic fertilizer product or a super high quality soil conditioning product.

As far as the biogas operation is concerned, if this a situation where you produce the gas and transport it elsewhere, or do you have a power plant on site?

We own and operate the power facilities. Essentially what happens is, we sign a contract with waste generators, food processors, municipalities, and so on, and then we’ll put up the capital, build the plant, and we then we sell our products – the power going to the local utility, the agricultural products going to lawn and garden customers, among others.

Now, waste-to-energy isn’t a renewable we talk all that much about here in the US?

I really call it organics-to-energy because there are actually a lot of crops that can used to create energy as well; now, to your point, you’re right, wind and solar completely dominate the discussion around renewable energy.

But when you look at the facts, the facts don’t support that, either here or in a country like Germany, which is a top four or five industrial economy and one of the most advanced renewable energy economies in the world.

Last year, about 11 percent of Germany’s energy came from renewable sources, but if you added up all of its solar and wind capacity and multiplied the number by two, it still wouldn’t reach the amount of energy that they are producing from organics.

In the United States, meanwhile, why I don’t know the exact statistics off-hand, I do know that hydroelectric and power from organics are the two biggest sources of renewables-derived energy in the country. Wind is up and coming. So is solar, but the organics-to-energy pathway, a biological-based system, really dominates.

In Germany alone, close to 1,000 biogas plants have been built, and Harvest Power has been inspired by that. It’s why I started the company and why we’re envisioning such great growth prospects. That, and our creating a business model where you get paid for the feedstock, get paid for the renewable energy, get paid for the fertilizer coming out of the back end… and because we have these different revenue streams, we’re able to charge a lower tipping fee at the front end than municipalities and others can get at a landfill.

OK, if it’s a given that wind and solar are what’s garnering all the attention, is it also a given that your sector, organics-to-energy, is getting left behind when it comes to government support?

Well, once government takes the time… the policy makers, they’re smart people, they get it. Massachusetts, for instance, just passed legislation encouraging the development of organics-to-energy through anaerobic digestion. But the popular press is completely dominated by the solar and wind, and the reason I think that is so is because of the number of companies that have gone public right? So there’s just more general understanding around them, but when you really dig and you find out where renewable energy is coming from, wind and solar don’t match up against organic energy.

So how does this disconnect among the generation public impact you? More time doing public education?

I think basically it is a big, big opportunity that Harvest Power has identified and that’s fine right now because it will continue to grow in this space and we just happened to have identified it as a first mover; As a result, we’ve grown the business quite nicely and we have all kinds of growth prospects in front of us, so the fact that other people have not woken up to this is just fine by me; but eventually they will.

You spoke earlier about your business model; could you talk a little bit about how you’ve rolled out your facilities?

What we’ve done is focus on areas where you have big population centers, municipalities that have renewable energy policies in place, and those that are good markets for the end product.

How did the fertilizer business come about?

It was part of the original plan. One of the great things about anaerobic digestion is it’s nutrients in; nutrients out. You don’t lose nutrients in the process of making biogas, so at the end of the day, they’re still there to support global agriculture. So it was a matter of simply recognizing that there are a number of ancillary benefits to this organic material outside of the production of renewable energy.

And all of realized through the deployment of bacteria, right?

That’s true. It’s basically the same biological process that occurs in a cow’s stomach. The only difference is we’re taking the process, enclosing it, capturing the biogas – which is in a cow’s case is the methane gas they expel – and we create energy out of it. But the “biology” is virtually identical to what goes on in a cow’s stomach. We just take the additional step of using the gas to power an engine generation set which is hooked to the electric grid…

How do you sell the fertilizer product?

We sell it in the retail lawn and garden market, we sell it to the landscape trade, and we also sell it into high-end agriculture, the people that really value improvement of soils and using high quality compost on their land to increased crop yield.

What’s been the most complicated thing about putting this business together?

Well, we’re going out into the North American marketplace right now, and we’re basically educating people about food waste, about how 95 percent of it is still being disposed of in landfills, and the benefits that can be achieved from repurposing it.

Obviously, some communities are already well aware of this and are actively engaged in it, like Ontario, Canada, parts of British Columbia, San Francisco, Calif., Seattle, Wash, places like that. So the key is to point to these communities so that others can see the model in action, see that it has successfully been rolled, and see that they can save money, reduce their environmental footprint and increase their environmental sustainability.

From an environmental responsibility standpoint, reusing organic waste in this way is light years ahead of having it end up in a landfill, you know? So when they can reference actual examples of where this has been a success, go see and kick the tires, they say, “OK, I want one.”

What kind of savings do they achieve?

The big savings are on the disposal costs, the tipping fee, and they can range anywhere from 10 percent to 50 percent.

You mentioned compressed natural gas in passing earlier, could you speak a bit more on that subject?

Well, compressed natural gas is basically natural gas, which is mostly all methane, that’s been compressed it so that basically it can then be used as a transportation fuel.

My potential is we can take biogas and create an identical product to natural gas, and from there, we can compress it and we can make it into a transportation fuel. So from my pathway, it can be identical to how they make it right now with natural gas, but the obvious difference is it is all made from renewable sources and not piped out of the ground.

How do you ultimately see this biogas being used?

Well, right now, many of the big transportation companies that are involved with, like, fleets of trucks that go out and come back to the same locations, school buses, garbage trucks, things like that… are converting to CNG, because it is almost half the cost of diesel. So that’s a significant savings and it’s a much cleaner burning fuel than diesel. So it’s win-win, better for the environment and also cheaper, and when you make CNG the way Harvest Power makes it, which is through anaerobic digestion, you truly have a carbon neutral energy source.

Are you being impacted by the shale gas phenomena that’s causing natural gas prices to plummet here in the US?

That’s an issue, and so we think that the way forward for biogas is for it to be used as part of the natural gas infrastructure that’s being built out. I think it has a potential to be rolled out in a way that’s very similarl to the way corn ethanol has been used with petroleum. In this country roughly 10 percent of the fuel we buy at the pump has is ethanol, and I see a potential parallel there, where our compressed biogas can be used to mix with the traditional compressed natural gas and make for a cleaner fuel.

Does the building out of the infrastructure that’s gone along with this explosion in shale gas production helped you with the delivery of your product?