What Place for Hydrogen? An interview with Professor Armin Schnettler of Siemens

Monday, 20 April 2020
0
Robin Whitlock
An interview with Professor Armin Schnettler, Executive Vice President and CEO of the New Energy Business at Siemens Energy, on the impact of hydrogen on the global green energy market. 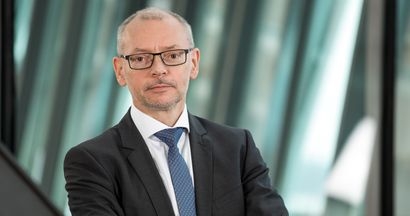 Armin, electrification has become an important answer to reducing carbon emissions, since it can meet at least a third of end energy consumption. so, what are your feelings about the other sectors, that can not be electrified, such as industry, marine and aviation?

I strongly believe that the next step on the global energy transition path will be based on the hydrogen economy, transforming green electrons to green molecules via water electrolysis to create green hydrogen.

The share in global CO2 emissions of the power sector is 40% so the other sectors like industry, transport or buildings contribute more than half of the emissions. This means that we need to find solutions to decarbonise the other sectors by using electricity from renewables, such as PV and wind as well. Green hydrogen produced from renewable energy and water can close the gap, whether via direct use or combined with chemicals to create green methanol and green ammonia. These chemicals can be stored, transported and used in all kinds of sectors as synthetic fuel or fertilizer for example.

So, with a hydrogen economy, what is the most popular answer to the question of reducing emissions. We see the market for hydrogen migrating from grey, to blue and then to green with each having its own role utilising different transition technologies.

Right. interesting. I'll jump forward then in that case, because you've mentioned green, blue and grey hydrogen. can you just explain the difference between those three types of hydrogen?

The hydrogen market at present is mostly comprising grey hydrogen, which is produced from fossil fuels like methane, natural gas and coal. This production emits about 10 kilograms of CO2 per kilogram of hydrogen. Then there is blue hydrogen, which is also derived from fossil fuels, but is emitting less CO2 since the resultant CO2 is captured and pumped into redundant gas fields and stored. Lastly, there is green hydrogen, for which renewable electricity is used to power an electrolyzer to create hydrogen and oxygen from water. If the water and power come from sustainable sources, then the hydrogen is classified as pure green hydrogen, which is the focus of our New Energy Business.

So, what does the current hydrogen market look like at the moment?

Can you say more about what role hydrogen can play in reducing carbon emissions?

Together with carbon monoxide or carbon dioxide, hydrogen can be used to synthesize, for instance, methanol which can be used in engines directly or as another feedstock for methanol-to-gasoline processes. Fossil-fuel based aviation fuel can also be replaced with synfuels based on hydrogen plus CO2, which if captured from the atmosphere is carbon neutral. Also, a synthesis of ammonia is possible which can be used as fuel in ships or as fertilizer. Elsewhere, hydrogen can reduce the need for coal, for example in the steel industry. Basically, what I am saying is that the possibilities for the use of hydrogen are huge.

So where are the main sweet spots for hydrogen? what kind of things will it be used for?

The transport sector would be an early adopter. Longer distance mobility with buses, trucks and trains are a real sweet spot. My colleagues are using hydrogen fuel-cells for regional trains, which will replace diesel powered engines. We already have hydrogen combined with fuel cells and electric drive trains in cars in China, South Korea and Japan, where research funding has been increasingly focused on fuel cells instead of batteries. Even German original equipment manufacturers, which are currently focused on batteries, are starting to develop cars with fuel cells. The market for synthetic fuels also is very promising.

Another promising market for green hydrogen would be steel and plastic production.

So what stage are we at with the hydrogen technology, I mean, what kind of current research is being carried out?

We are at the beginning of the large-scale industrialisation of hydrogen. In the previous ten years, Siemens have worked on developing the technology. Five years ago, we started in the 1 MW range and have conducted pilots with customers for different applications.  We brought the Silyzer range into the market, which is a standardised product and two years ago we launched the 10 MW generation on to the market. Last year, together with our partners Verbund and Voestalpine, we built our first installation at a steel plant in Linz Austria.  We see an increase in power ratings by a factor of ten every four to five years. We are now in the bidding phase for 100 MW projects and are in discussions for GW installations! Hydrogen is in its initial industrialization phase, just like when solar and wind industries started up.

So as far as I'm aware, at present hydrogen is used where it is produced, such as refineries. do you see that changing?

We are in a period of transition. It is possible that existing plants will not change, but the plants of the future will use a mix of perhaps green, grey and blue hydrogen. But most new growth will come in green hydrogen, which will be based on cheap renewable energy particularly solar in the Middle East and North Africa and wind in South America.

I expect the market to split into two segments distinguished by the scale of production.  Synthetic fuels and ammonia requiring large scale production and distribution on the one hand, and small-scale local production for hydrogen filling stations, chemical plants and factories on the other. Such large-scale output is only feasible in regions with cheap power.  Looking into my crystal ball I would expect the big scale projects starting in the next 3 to 5 years and grow steadily thereafter.

What are the main challenges when it comes to transporting and storing hydrogen?

In principal, there are several options for transporting and storing but the most relevant one is to compress hydrogen gas at 300, 350 or 700 bar for transportation in steel tanks for short distances for storage at fuelling stations. Or you could convert hydrogen into e-methanol or e-ammonia.

So how are regulations helping or hindering the adoption of hydrogen?

The hydrogen economy cannot be based on subsidies, we need to create sustainable markets. What we need is a suitable regulation ideally with a firm commitment by the industry in the form of targets, something like we must base X percent of today’s fuel on green hydrogen. This is something the regulators can easily do and is open to technological and market developments. In effect you let the markets run, and then you set the right market regulatory framework. Big companies like Siemens are committed to this development while Microsoft and Apple, amongst others, aim to become partly or completely carbon neutral or even carbon negative. In this way you create the demand for hydrogen or synfuel and industry creates the technology.

So what are the major milestones on the way to a hydrogen system, and are there good examples already ?

I think that a regulatory framework stipulating decarbonisation targets for fuel composition will create and drive the market for green hydrogen and biomass. The EU’s Renewable Energy Directive II is a pioneering example with its implementation due in the next couple of years. But there are discussions concerning regulatory frameworks taking place around the world. A case in point is Switzerland and Canada, which have a regulation in place which is already creating demand for green hydrogen projects. And more importantly, the UK has just announced plans to build an electrolyser fleet of up to 2.4 GW, which is a tremendous size.  At Siemens we are having wide-ranging discussions with partners on the production of green hydrogen and synfuels and looking at potential new products.

What kind of costs are we looking at with hydrogen? What does the affordability look like?

Industrial-scale grey hydrogen production costs are in the range of approximately €2 per kilogram, sometimes less, depending on local conditions. Currently to fill-up your car at the hydrogen filling station, you may pay €9 per kilogram. If the green hydrogen was produced locally at a filling station, then a competitive price would be somewhere around 6 euros – 7 euros per kilogram.

However, the cost of producing green hydrogen is strongly dependent on three elements:  the cost of electricity, the loading factor of the electrolyzer plant and lastly the capital and operational costs. Costs strongly depend on whether a plant runs for say 3,000 or 6,000 hours a year, and the cheaper the electricity, the lower the cost of hydrogen will be. And lastly, the cost of electrolyser plants. We have already seen that in areas with good conditions costs for the production of green hydrogen are below 3 euros per kilogram.

As for price ‘willingness’, I expect green hydrogen to command a higher price than its fossil based grey or blue rival, depending on the regulations in place. There needs to be more pilots in this area to develop a solid business case. It is important that pioneers share the risk, because the front runners have the highest upfront costs while any successor will enjoy already lower costs of between 10 to 15 percent. This risk must be shared by many shoulders to reach global scale and speed up production.

How do you see future prospects?

Armin Schnettler is Executive Vice President and CEO of the New Energy Business at Siemens Energy as well as incoming president of VDE, the German Association for Electrical, Electronic and Information Technologies. He joined Siemens in 2013 as Senior Vice President of New Technology Fields in Corporate Technology. Before this period, he held several positions at ABB and became member of the management team of ABB’s business area “High Voltage Products and Substations”. From 2001 till 2018 he held a full professorship and was director of the Institute for High Voltage Technology at RWTH Aachen University. Until joining Siemens, he has additionally been managing director of ‘Forschungsgemeinschaft für elektrische Anlagen und Stromwirtschaft e.V. (FGH e.V.)’ – Research Association of Power Systems and Power Economics.