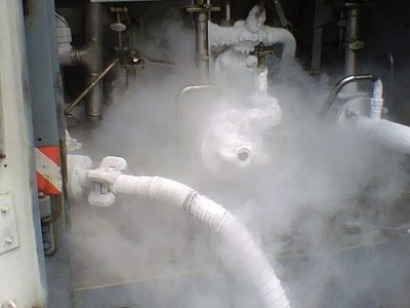 A number of British organisations and Universities are already developing ways to use liquefied air (or liquid nitrogen, its major constituent) as a zero emission energy storage medium and transport fuel. Although cryogenic liquids are widely used in industry already, their adoption as an energy vector is only just beginning, and is not yet part of the mainstream energy debate. However UK companies are already securing strategic partnerships around the world, as well as in the UK, for liquid air energy solutions.

“As we look to run our homes and cars, businesses and factories on zero or low carbon energy, we need new solutions to capture and essentially warehouse green energy so it can be used when and where required either on the grid or in a vehicle,” says Dr Tim Fox, Head of Energy & Environment at the Institution of Mechanical Engineers. “At one end of the scale, pumped hydro provides very large scale energy storage but is limited geographically by requiring mountains; while at the other end of the spectrum, batteries can fit in vehicles but currently are expensive and take hours to recharge. Liquid air and liquid nitrogen are an exciting alternative we should explore to store energy.  It seems to address many of the challenges we face and is affordable, uses mature components and is highly scalable.”

The UK has world class mechanical and thermal engineering expertise and one of the densest concentrations of cryogenics expertise in the world – the “British Cryogenic Cluster”.  This presents a number of real opportunities in terms of intellectual property revenues, skills development, manufacturing and jobs whilst meeting UK and overseas low carbon energy requirements.

“We don’t have a globally significant battery industry in the UK, but we do have world class cryogenics and mechanical engineering sectors. With the right support from government, Britain could steal a march in this technology and capture many of the jobs it would create,” explains Dr Andy Atkins, Chief Engineer of Technology at Ricardo.

Toby Peters, one of the founders of Highview Power Storage and Dearman Engine Company – two technologies using liquid air as the working fluid – adds: “This is absolutely about harnessing an existing knowledge base for innovation.  We are using mature technologies, but redeploying them in new and fast growing markets.  This is cheaper and quicker to market, offering lower technology risk to the customer and new commercial opportunities to the existing supply chain and research institutions; without the need for massive upfront capital investment in manufacturing processes or infrastructure. It’s all there.”

Energy storage and zero-emission powertrains for transport are industries worth tens of billions of pounds and tens of thousands of jobs, but they are currently dominated by America and Asia. Developing a UK industry which requires limited investment in new expertise or manufacturing plant is a huge economic opportunity for UK.

Supported by the Institution of Mechanical Engineers, the British Cryogenic Cluster, the Centre for Low Carbon Futures and a number of UK Universities, leading academics and industry representatives are setting up a working group to assess and quantify the future role of liquid air as an energy vector in the UK and abroad. The programme will be launched at the Institution in early October, with a series of round table discussions planned for this winter to feed into the debate. The aim is to have a first report published by the Centre for Low Carbon Futures in Spring 2013.

Proponents say that liquid air and liquid nitrogen offer many advantages over other storage and zero emission technologies such as batteries and hydrogen. These include:

Air can be liquefied by reducing its temperature to around -190C using standard industrial equipment. 710litres of gaseous air becomes 1 litre of liquid air.  It can then be stored as a liquid in an insulated vessel at atmospheric pressure and in very large volumes. Since it boils at -190C, liquid air (or liquid nitrogen, its major constituent) need only be exposed to ambient temperatures to super heat it and turn it back into gas, producing a more than 700-fold increase in volume. This expansion can be harnessed to drive a piston engine or turbine for a wide variety of static or mobile functions from a few kWs to tens of MWs. The exhaust is air. The low starting temperature of the process means its efficiency can also be increased by the addition of low grade waste heat, which is plentiful and otherwise difficult to harness.

Air was first liquefied in 1883.  Today air liquefaction and the sale of industrial gases is a major global industry. We use its major constituent, nitrogen, in a myriad of industrial processes form; but according to John Raquet, an industry consultant, most ASUs are not currently optimised to produce as much nitrogen as they could.  As a result, he says, with modest investment it wouldn’t be hard to double global nitrogen production from the existing plants to 3 million tonnes per day.

This would be equal to 300GWhs of wrong time or excess electricity captured and stored for use in vehicles or on the Grid.  In northern China alone, they currently ‘dump’ more than 35GWhs (35,000MWhs) of wind on average each day because of wrong time, intermittency and lack of adequate connections. While in Texas, state power planners estimate that for every 100 megawatts of wind turbines installed in the state, only about 8 megawatts will be available on peak days.

“We’re coming out of the cave blinking on this one and we’re only just getting an inkling of how great the energy storage benefits of liquid air could be,” concludes Dr Fox.