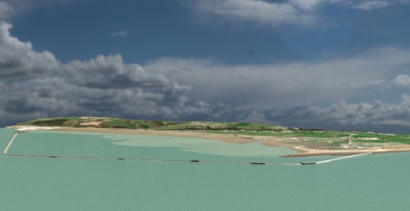 Building the 4.1 mile (6.7 kilometer) long lagoon, stretching from the breakwater at Mostyn to Point of Ayr in Flintshire, would create 300 jobs during the construction phase and up to 30 high-skilled permanent posts.

It’s being developed by Mostyn SeaPower Ltd., a subsidiary of the busy Port of Mostyn, who say it will provide a massive boost for the regional economy and play a key role in helping North Wales to recover from the economic downturn caused by the COVID-19 crisis

The company will be using local labor and suppliers wherever possible and if everything goes according to plan, the turbines could be turning and producing energy by mid-2027.

As a relatively small scale renewable energy development, it’s expected the scheme can pave the way for larger tidal power projects at other locations along the Welsh coastline with suitable tidal variations and fulfill the growing need to produce clean, green energy.

The Dee Estuary is an ideal location because it has one of the highest tidal movements in the UK as well as having natural deep water for the installation of the turbines.

The lagoon wall will be 6 ½  feet (two meters) above sea level and another major benefit
is that it will provide much-needed flood protection the low-lying land along the coast which includes homes and businesses, the A548 Coast Road and the strategically important North Wales coast railway line which has suffered significant storm damage in recent years.

It will have two sets of turbine houses with three sluice gates to control the volume of water over the tidal cycle, along with lock gates allowing small vessels in and out of the sheltered lagoon.

In total there will be eight 16-MW turbines which will generate 298 Gigawatt hours of electricity annually from the lagoon which will enclose an area of 4.7 square miles (12.2 square kilometers) and has a design life of more than 100 years.

The lagoon wall will have a road running along the top and a path that will be accessible to the public.

Unlike other forms of renewable energy, like wind and solar, which are subject to the intermittent vagaries of the weather, the tides are constant and predictable, offering a completely reliable supply of power.

Preparatory work, including environmental and ecological studies, has been taking place for four years and the lagoon will be designed to maintain navigational access for shipping.

Mostyn SeaPower has been working with engineering consultants Ban Nuttall from Camberley and environmental experts ABPMer, from Southampton and the company has already negotiated with the National Grid for the electricity to be used by the nearby Connah’s Quay Power Station.

It is planned to submit an application to the UK Government for a Development Consent Order by the end of 2022 and get the green light a year later.

Jim O’Toole, the managing director of the Port of Mostyn, said, “The construction time for the lagoon wall, turbine housings and sluices will take approximately four years.

“Manufacturing of the turbines will take two years to complete and will be carried out in conjunction with the wall construction.

“The turbines will be assembled at the port and will be installed simultaneously with the lagoon wall.

“As each turbine is tested and commissioned it will be connected to the grid. First power is expected to be delivered to Connah’s Quay in mid-2027and project completion by the end of that year.

“During the construction phase in the order of 300 jobs will be created at the port and further employment will be secured in local companies providing quarrying, mechanical, electrical, hydraulic, steel supply and fabrication services.”

During the long term operational phase, the project will directly employ between 25 and 30 local people in highly skilled positions with a further five or six people indirectly employed in supporting services.

“The relatively small scale of the Mostyn SeaPower project will pave the way for future larger scaled projects around the Welsh coast,” O’Toole concluded.