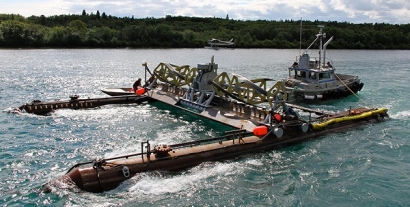 Alaska Governor Mike Dunleavy and a crowd of over 60 people gathered at Lake Iliamna and the Kvichak River in Igiugig for the unveiling of ORPC’s first commercial device, which will be deployed long term in the Kvichak River within the next few days. The 40-kW power system will provide up to half of the Igiugig community’s electricity needs annually and will reduce use of diesel fuel. Plans are underway for installation of a second RivGen device in conjunction with smart microgrid electronics and energy storage.

When completed, the system will reduce diesel usage by 90 percent.

“For millennia the mighty Kvichak River has sustained us with the greatest sockeye salmon run on earth,” Alexanna Salmon, Igiugig Village Council President stated. “For now, it supplies us 100 percent of the purest drinking water, flowing from Alaska’s largest lake. It is high time that the Kvichak supplies 100 percent of our energy needs. Our village has always believed that if it can be done here, it can be done anywhere on the globe.”

Steve DeWitt, U.S. Department of Energy, said the project will benefit the domestic hydrokinetic industry by increasing knowledge of marine energy systems, the interaction of underwater turbines with salmon and how systems contribute to providing stable power for local microgrids.

“With this data in hand, we hope that other communities considering similar systems will be able to make, with greater confidence, the right decisions for their community’s future,’ DeWitt said.

“I believe that what we are doing here in Igiugig is a model for what can happen throughout Alaska and Canada, in other similar small, independent communities.”

The Igiugig Village Council is the first tribal entity in the U.S. to be issued a Federal Energy Regulatory Commission hydrokinetic pilot project license. The Igiugig Hydrokinetic Project is supported by the U.S. Dept. of Energy’s Office of Energy Efficiency and Renewable Energy under the Water Power Technologies Office Award Number DE-EE0007348; the U.S. Dept. of Agriculture; the Alaska Energy Authority; the Igiugig Village Council and private investors.

In Alaska, ORPC works with over 80 partners, contractors and consultants, and since 2009, has spent over $5 million in the state.