Thursday, 26 April 2018
0
Robin Whitlock
A study by Atlantis Resources has concluded that 2 GW of tidal energy is immediately available to be harnessed in the area of Le Raz Blanchard, Normandy, with 1 GW potentially becoming operational by 2025. 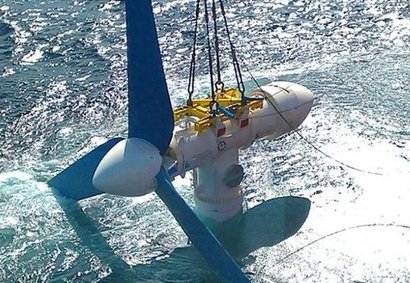 Harnessing this energy could create up to 10,000 jobs and attract more than 3 billion euros of CAPEX investment. Atlantis has submitted a strategic plan to the French government, setting out plans to deliver an initial 1 GW by 2025, driving a reduction in the Levelised Cosxt of Energy (LCOE) for tidal energy lower than any offshore wind farm currently in construction in France or in the UK when the final phase of the project is commissioned. If implemented, Atlantis believes this would be the largest tidal power project in existence. The study also concluded that the site could be quickly expanded to 2 GW by 2027.

The plan envisages construction of 2 GW project in Le Raz Blanchard would attract 3.3 billion euros of investment and open an export market worth an estimated 400 million euros in turbine sales each year, with the potential to create 10,000 jobs.

France is already actively involved in developing tidal stream experimentation sites and pilot projects in preparation of tidal commercial rounds recently announced by the Environment secretary of state Sebastien Lecornu. Atlantis meanwhile is actively pursuing an opportunity to develop a reference site in or off the Normandy coast and is seeking the assistance of the French Government to allow investments to be made in Normandy region’s local supply chain and maritime infrastructure. Atlantis’ plans for the French territorial waters will require the development of a strong local supply chain to fabricate the turbines and perform the offshore construction activities.

The Atlantis proposal includes the development of a dedicated, state of the art turbine assembly, testing and operations and maintenance facility in Normandy upon award of commercial tenders for large scale arrays. Discussions with French government and Normandy officials have taken place to discuss the industrial plan.

Studies commissioned by the French Government are currently underway to assess the best tidal power sites in French maritime waters ahead of commercial tenders. Conclusions from Maritime Prefectures are expected in June this year and Syndicat des Energies Renouvelables has been central in these works. The independent proposal compiled by Atlantis intends to build on the success of the MeyGen project in Scotland where more than 6 GWh of predictable renewable power has been generated and where, in March 2018,  a new world record for monthly production from a tidal stream array was set with 1,400MWh exported to grid.

“France is sitting on a low cost renewable energy gold mine at Le Raz Blanchard” said Atlantis CEO, Tim Cornelius. “Now that the tidal stream industry has been through the R&D phase and is now entering full scale commercialisation, France should be at the forefront of exploiting this environmentally benign, predictable and inexhaustible source of renewable energy. Our proposal, if implemented, could quickly create a new industry in France attracting investment in local companies to establish a supply chain capable of delivering more than 1,000, 1.9MW tidal turbines along with their associated foundations and the onshore infrastructure. With the support of the French Government, we can provide energy security, job creation, economic stimulation for the Normandy and Brittany regions along with the opportunity to lead Europe in the field of marine energy generation.”