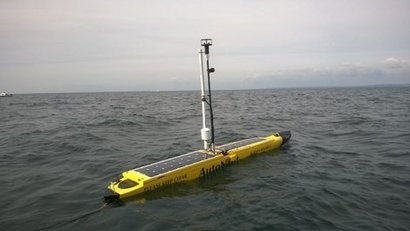 The investment will provide additional resources for R&D and manufacturing as well as administrative support. Seiche will also help to expand all sales and marketing activity. As one of the fastest growing companies in the marine technology sector, Seiche will provide a springboard for AutoNaut into a number of commercial markets.

Seiche agreed its first investment in AutoNaut in September 2015. The new deal gives Seiche a majority stake in AutoNaut although AutoNaut Directors David Maclean and Mike Poole will continue to run the company from their Chichester base, concentrating on Technical and Marketing/Sales activity respectively.

AutoNaut was previously known as MOST (Autonomous Vessels) which was founded in 2012. The company designs and manufactures wave-propelled boats that are equipped to operate as an autonomous marine data collection hub. A fleet of craft is now in production in a range of sizes to suit multiple applications across the Oil & Gas, Renewables, Civil Engineering, Research and Science sectors as well as for Defence, Security and Surveillance.  The vessels require no fuel, making them capable of long endurance ocean missions. They are storm-proven and operate persistently at up to 4 knots with the manoeuvrability to perform a range of survey tasks from station-keeping to complex transects. A suite of state-of-the-art sensors can be fitted, including gyro-stabilised HD cameras, hydrophone, oceanographic sensors, electronic and radar detection equipment. The craft may then act as a communications bridge to transmit data to shore in real time for remote offshore operations. These capabilities open up monitoring (PAM), pipeline inspection and surveillance for illegal fisheries and border patrol.

“AutoNaut is set to be the go-to marine data collection hub of the future” said Roy Wyatt, MD of Seiche. “AutoNaut can independently operate offshore for months fitted with a suite of cutting edge sensor technologies.  AutoNaut complements and completes Seiche’s portfolio of monitoring, mitigation and measurement products and services.”

David Maclean of AutoNaut added that the Seiche investment gives AutoNaut a great opportunity to take the business to the next level of growth and to tackle the expanding global market for specific applications of marine autonomous systems. Over four years, the company has taken a revolutionary wave propulsion technology, proved it is seaworthy, and turned it into a widely capable marine data collection hub to gather and transmit data from below, above, and at the surface of the world’s oceans. The Seiche investment will enable AutoNaut to realise its full potential.

Successful trials monitoring noise in the English Channel have recently been completed with a PAM-AutoNaut, in partnership with Plymouth University. This PAM application will be developed further in the coming months with a baseline sound survey for Oil and Gas industry in UK waters. Participation will then follow in the anti-submarine warfare (ASW) section of the NATO Unmanned Warrior exercise off the Hebrides in October.

Seiche was listed in the 2015 Sunday Times Tech Track league as the fastest growing marine technology company in the UK. The company specialises in the manufacture of underwater acoustic systems and provides a range of services in modelling, measurement and mitigation. The company also runs training in Advanced Underwater Acoustics, Passive Acoustic Monitoring (PAM) and JNCC accredited Marine Mammal Observation.

Formed in 1996 to undertake underwater acoustics research projects, the company was involved in the early stages of PAM development. Seiche Ltd is now the leading worldwide supplier of PAM equipment to the oil and gas and renewable energy industries with a proven track record exceeding 150,000 days of deployment.

The company provides a range of marine acoustic solutions from simple single hydrophones to state-of-the-art digital systems and has a global reach via offices in the UK, USA, South Africa and Scandinavia. Seiche maintains strong partnerships and relationships with industry, academics and government agencies around the world.