Carnegie Wave Energy establishes a base in Cornwall, UK

Monday, 29 June 2015
0
Robin Whitlock
The Australian tidal and wave energy company Carnegie Wave Energy has established a base in Cornwall with a berth at Wave Hub. 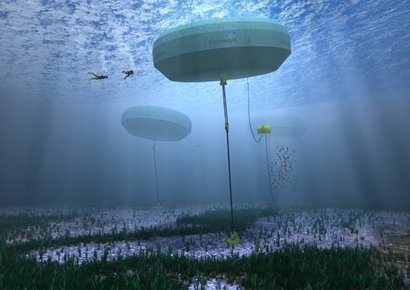 Carnegie Wave Energy Limited develops technology that converts ocean swell into zero-emission renewable power and desalinated freshwater. The south west region of the UK has superb infrastructure, supply chain and suitability for the deployment of renewable energy technologies. For this reason, the company will establish its CETO 6 wave energy technology in the country of Cornwall, deploying the technology at Wave Hub in 2018.

CETO is a simple and robust wave technology and is the only ocean-tested wave energy technology that is both fully submerged and generates power and desalinated water onshore. The technology has been independently verified by EDF and engineering consulting firm Frazer Nash.

Wave Hub is the world’s largest and most technologically advanced site for the testing and development of offshore renewable energy technology. It is located 16 kilometres offshore in the Atlantic Ocean and offers Carnegie an ideal test facility. The company is bringing CETO to the UK for pre-commercial testing following extensive research and development in Australia. Wave Hub also offers direct grid access with a capacity of 30-48 MW and an on-facility substation. The project has already started, with construction scheduled to commence in 2017 and first power by 2018.

“We are delighted to welcome Carnegie to Cornwall” said Claire Gibson, Managing Director at Wave Hub. “The company’s decision to locate at Wave Hub reinforces the global importance of the facility.  The infrastructure for the development, testing and deployment of Marine Renewable Energy (MRE) solutions in Cornwall is truly market leading.  The location of Carnegie in the region will present a significant opportunity for the local supply chain, as the majority of fabrication and engineering will be completed locally.”

To bridge the gap between pre-commercial development and commercial roll-out the company requires a facility that offers supporting infrastructure, streamlines approvals and direct access to the grid. Carnegie has identified Wave Hub as meeting those requirements and it is already starting to work with Cornwall’s extensive supply chain in order to move the project forward. The company is likely to hire 10 UK employees over the next 12-18 months with a planned expansion as the project is developed commercially. It believes the facility will provide an invaluable testing ground and enable it to take CETO 6 to market as a tried and tested environmentally-friendly power generation solution.

CETO is different from other wave energy devices in that it operates under water where it is protected from larger storms and invisible from the shore. The device can generate either offshore or onshore and the fully submerged buoys can drive pump units to deliver high pressure fluid onshore to standard hydroelectric turbines, generating zero-emission electricity. The technology can also be used to power a reverse osmosis desalination plant, replacing or reducing reliance on greenhouse gas-emitting, electrically-driven pumps usually required for such plants.

Carnegie is currently located at the Pool Innovation Centre and plans to move into the Hayle Marine Business Park following its completion later in 2015. The company has been supported by Invest in Cornwall, a project funded by the European Regional Development Fund (ERDF) and Cornwall Council, hosted by Cornwall Development Company.