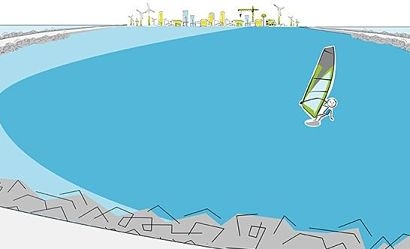 MPs on the business and Welsh affairs committee has begun taking evidence from a range of participants, including ministers, Charles Hendry (author of the Hendry report) and Mark Shorrock, chief executive of Tidal Lagoon Power, the company behind the Swansea project. There is a suspicion that the government feels it is unable to support the Swansea project due to excessive cost, enabling Ecotricity to step in with two rival plans.

The two new plans were unveiled on Wednesday (9th May). They are in the Solway Firth, one on the English side of the border and the other on the Scottish side. Ecotricity says that both projects would generate as much electricity as the Swansea Bay proposal, but at half the cost to build. That means they can make electricity for half the cost, claims the company.

The plan is to deliver the cost reductions by siting the lagoons offshore instead of onshore. Offshore tidal lagoons cost less to build, operate more efficiently and have significantly less environmental impact.

Ecotricity shared this information with former energy minister Charles Hendry as he drafted his independent review of tidal lagoons, nearly two years ago, but the concept of offshore and its inherent advantages had no mention in the final report. Hendry instead focused on the need to move swiftly to support the Swansea scheme despite its incredible asking price. The company has now partnered with Tidal Electric – the originators of the tidal lagoon concept, to develop the Solway sites. The two firms are signalling to the government that they are ready to take part in a competitive process.

“The government has done well to resist the last couple of years of intense lobbying pressure from backers of the Swansea scheme, there was never a case for paying that much or for moving too quickly to allow for proper competition” said Ecotricity founder Dale Vince. “In the last year the asking price for the Swansea project appears to have dropped considerably (by up to half), that’s a valuable use of time by the government. But there’s more to go. The reasons cited by Hendry to move quickly to support this expensive first tidal lagoon project (Swansea) have all fallen away. The case for an open competitive process, to kick start this nascent industry and ensure value for public money, remains compelling.

Mr Vince added that offshore wind is a great example of the process and that it has been a tremendous success for the government. Starting out at almost twice the price of onshore wind it has fallen in price by 50 percent in the last three years. This same competitive process could be used to bring new tidal projects forward. Ecotricity believes that, done properly, tidal lagoons could play a big part in the UK’s future energy mix and in lowering the country’s energy bills.

Tags: Tidal , Offshore , Electricity , Wind , Renewable energy
Add a comment
Jerym eedy
Some explanation as to how offshore lagoons would be cheaper,easier and more efficient would be interesting.
wind