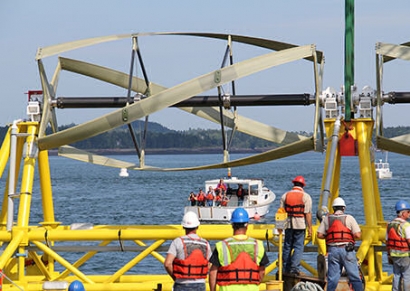 Once the project is functioning, ORPC will collaborate with Homer Electric Association, Inc. (HEA) to sell it the tidal energy produced.

“Cook Inlet is the premiere tidal resource in the U.S. and harnessing clean, renewable, reliable energy from it will help the U.S. achieve its ambitious goals of a 100 percent clean energy economy and net-zero emissions,” said ORPC Chief Executive Officer, Stuart Davies.

“Homer Electric Association supports ORPC’s FERC application and wishes it well as it develops these technologies. HEA has developed a robust net metering program that is available to individuals and businesses seeking to create renewable projects. In the coming years, we anticipate additional opportunities to work with renewable energy companies such as ORPC to diversify and integrate renewable power into the HEA power grid,” said Brad Janorschke, General Manager, HEA.

ORPC intends to develop a 5 MW pilot project near East Foreland to verify the technical performance and environmental compatibility of its proposed marine energy devices. Project results will assist in planning a phased build-out of up to a 100 MW commercial-scale project. ORPC has previously conducted site characterization and environmental studies in the region. In the U.S., the preliminary permit and pilot license processes provide the regulatory structure for advancing innovation in marine energy technology while maintaining oversight by the Federal Energy Regulatory Commission and federal and state resource agencies.

The timing is driven by ORPC’s proven installations in Alaska, advancements in its scalable technology, support from Homer Electric Association, and strong alignment with state and federal renewable energy goals.

Marine energy could create 680,000 jobs and save 500 million tons of CO2 emissions globally according to the International Energy Agency, and the U.S. Department of Energy considers development of marine energy resources a domestic priority.

ORPC’s RivGen® unit installed in the Kvichak River at the remote Village of Igiugig, Alaska, is the longest operating current energy converter in the Americas. A second unit will be installed there this summer. By providing a fully renewable baseload power supply, the community will reduce its diesel consumption by 60 to 90%. ORPC is also working with the City of False Pass to determine the feasibility of installing a tidal energy project to offset diesel use there.

A recognized leader in marine energy technology innovation and operational excellence, ORPC is headquartered in Portland, Maine, near its engineering and electronics laboratory in Brunswick, its marine operations center in Eastport, and in-water product test site in Cobscook Bay. In Alaska, the company has a project office in Anchorage, and an active operating project for the Village of Igiugig. ORPC’s international presence includes subsidiaries in Montreal (ORPC Canada), Dublin (ORPC Ireland) and Punta Arenas (ORPC Chile).

ORPC has a long track record of prestigious awards dating back to more than a decade, including “World’s Top Ten Most Innovative Companies in Energy” by Fast Company (2013), the National Hydropower Association’s Award for Operational Excellence in 2016 (ORPC is the first marine energy company to receive this award), and most recently “Innovator of the Year” by the Maine International Trade Center (2021).

In 2019, HEA launched its BESS project (Battery Energy Storage System) to increase grid stability, electric power reliability and system efficiency for its members. In addition to these benefits the BESS provides additional opportunities to collaborate with renewable energy producers, including ORPC. The BESS opens the door to renewable intermittent energy projects that would have otherwise stretched current thermal generation assets. When completed in fall of 2021, the BESS will be capable of storing 93 MWh (megawatt hours) of electrical power that can be delivered to the grid at a rate of 46.5 MWs per hour. The BESS will allow HEA to meet its reliability requirements without having to burn additional fuel. This will result in greater system efficiencies, lower greenhouse gas production, and reduced power outages.