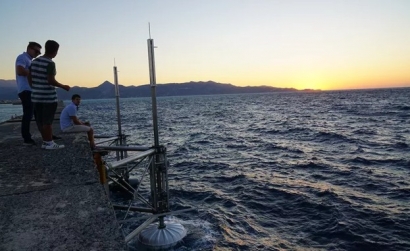 By implementing the new generation of prototypes, SINN Power is now one of the first wave energy companies able to generate controlled and stable energy from ocean waves.

The team around CEO Dr. Philipp Sinn was able to develop a second generation of modules in record time by implementing findings obtained from the first prototype.

SINN Power’s partners and supporters came together to celebrate the commissioning of two prototypes of the new generation at the Port of Heraklion.

Using agile development and a new simple concept, SINN power achieved the pre-series status in record time with a financial expenditure of less than € 3 million ($3.5 million).

The company spent over two years developing the mechanical and electrical components and connections. The second generation of wave energy modules worked smoothly and produced electricity that is usable within its off-grid system.

With the successful implementation of wave energy, SINN Power can now provide a long-term solution for the supply of mini-grid or off-grid systems.

Without the ongoing support of investors, academic institutions and the Greek-German cooperation, this breakthrough wouldn’t have been possible.

Dr. Sinn said, “A great thank you to all our team for their professional and hard work!”

Using the financial support of the German Federal Ministry for Economic Affairs and Energy (BMWi)  and a recent investment by the Schweizer Kapital Global Impact Fund  SINN Power plans to install three more modules on the breakwater wall in the Port of Heraklion. This will help the company achieve the goal of gathering data on the functionality and electrical output of the modules under different wave conditions.

The plan for a floating wave energy array, which will be built between 2019 and 2020, is already in the pipeline. These floating arrays will pave the way for SINN Power’s implementation within the renewable energy sector. The long-term goal is to take advantage of the unused potential of, for example, the space in-between large offshore wind farms, with electricity being fed into the grid.

In addition to the long-term development of floating wave energy arrays, SINN Power is already engaged in customer projects regarding the planning and implementation of smart off-grid systems. These highly complex hybrid-projects include wave energy as well as small wind, solar PV, and storage solutions.