Friday, 21 December 2018
0
Dan McCue
SINN Power recently took part in a business trip arranged by the DNHK (German-Dutch Foreign Trade Chamber) as part of the Energy Export Initiative of the BMWi. As part of this, CEO Dr. Philipp Sinn, and Head of Sales, Johannes Stuck, visited the Caribbean islands of Aruba and Curaçao. 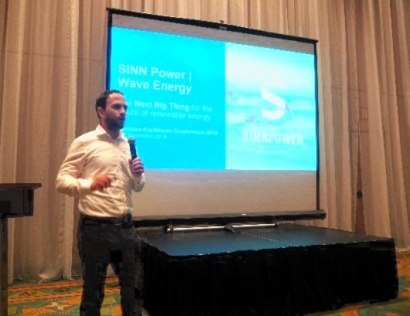 The German company SINN Power is the developer of an innovative wave power plant. The technology generates electricity from ocean waves and is applicable on coasts worldwide.
The aim of this business trip was to connect selected German companies from the field of renewable energy and energy efficiency with potential partners on the ABC Islands in order to market products and services of German companies.

SINN Power was able to present its innovative products and services to more than 100 participants during the 1st German-Caribbean Energy Conference and to hold talks with potential partners and customers in individual business meetings.

Currently, the power supply on the islands is very costly and subject to large fluctuations. The energy demand is mainly covered by fossil fuels. This is very harmful to the environment and also extremely expensive. Both in Aruba and Curaçao efforts are strong to steadily increase energy demand through the implementation of renewable energy.

In particular, the island of Aruba has ambitious energy goals. Prime Minister Evelyn Wever-Croes stated the following, “Aruba wants to promote the implementation and the use of renewable energies. Our aim is to become independent of fossil fuels in the future. In 2020, 50 percent of the energy supply should come from sustainable energy sources.”

One solution is providing renewable energy with ocean waves. The energy density from ocean waves is up to 100 times greater than that of sun and wind, and waves are much more continuous over the year compared to other renewable energy resources. Wave power plants are noticeably closer to a base load capability and can do without large storage or redundant systems.

Alexandra Sierra, Head of Sales Advisory at the German-Dutch Chamber of Commerce, said,  “So far, the energy needs of the ABC islands have been met mainly by fossil fuels, which had to be imported almost 100 percent. This dependency on the world market and the oil price has immensely increased the costs of providing energy on the islands. For many islanders this means spending a quarter of their salary on energy costs in everyday life.”

SINN Power is funded by the Federal Ministry for Economic Affairs and Energy (BMWi). In the summer of 2018 it became one of the first companies in the world to feed electricity from ocean waves into the grid. With initial reference projects in Africa and Greece, the renewable energy startup is currently conquering the energy innovation sector.