Thursday, 19 January 2017
0
Robin Whitlock
The board of Natural Energy Wyre (NEW) has welcomed the findings of the Hendry Review, and its support for tidal hydro power projects in the UK. 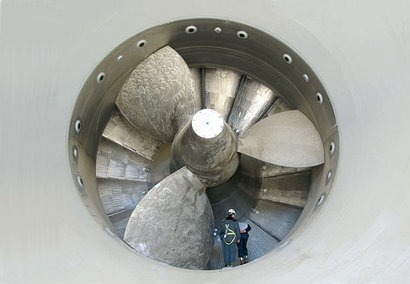 The Hendry Review highlights the long-term nature of tidal power generation and the need for government support in order to assist the industry in its fledgling stages and as a vanguard for future tidal hydro projects, both in the UK and abroad.

“I was appointed in May 2016 to assess the strategic case for tidal lagoons, and the role they could play in the UK’s energy mix” said Charles Hendry, the report’s author. “I believe that the evidence is clear that tidal lagoons can play a cost effective role in the UK’s energy mix and there is considerable value in a small (less than 500 MW) pathfinder project. I conclude that tidal lagoons would help deliver security of supply; they would assist in delivering our decarbonisation commitments; and they would bring real and substantial opportunities for the UK supply chain. Most importantly, it is clear that tidal lagoons at scale could deliver low carbon power in a way that is very competitive with other low carbon sources.”

Hendry added that tidal lagoons can be an important and exciting new industry for the United Kingdom, given that the country is blessed with some of the best resources in the world. This puts the country in a unique position to be world leaders with regard to tidal hydro power. The review finds that the costs of a ‘pathfinder project’ would be about 30p per household per year over the first 30 years while a large scale project would be less than 50p over the first 60 years. The resulting benefits of such an investment could be huge, particularly in South Wales, but also in many other parts of the country. On this basis Hendry recommends that the UK Government should seize the opportunity to move the technology forward now.

Clearly delighted with the review, following a thorough examination of its findings, the board of the Natural Energy Wyre (NEW) project, situated on the River Wyre at    , praised the “quality and quantity of understanding” contained within it, noting the recognition of the similarities between a tidal barrage and a tidal lagoon and “the important overlap in the technology, construction and skills associated with tidal lagoons and barrages”.

Natural Energy Wyre (NEW), along with Tidal Lagoon Power, are at present the only two tidal hydro power projects in the UK that are significantly advanced for government consideration, something that the review acknowledges. The NEW project on the River Wyre uses innovative, state of the art “triple regulated” turbine technology, aiming to help showcase the technology for the next 120 years. The company has now completed work on the validation of the project and can confirm a build cost of £340 million and an annual output of 290 GWh with a targeted completion date of June 2021. This in turn provides the best value for money on a pound per megawatt basis in the UK as well as helping to showcase the technology for the next 120 years.

The Hendry Review makes over 30 recommendations for delivering a tidal lagoon auditory bringing maximum benefit to the UK. These include an allocation by competitive tender for large scale tidal lagoons; a National Policy Statement for tidal lagoons similar to Nuclear new build where specific sites are designated as suitable for development and the establishment of a new ‘Tidal Power Authority’ at arms-length from Government with the goal to maximise UK advantage from a tidal lagoon programme.

In the course of its investigations, the Hendry Review Team visited Swansea, Cardiff, Newport, Liverpool, Bristol and Sheffield, enabling him to speak directly to people who would be involved in, or affected by proposals for tidal lagoons. The Review received almost 200 responses to the Call for Evidence.

The Hendry Review of Tidal Lagoons