51% of German renewables owned by citizens

Tuesday, 10 January 2012
1
REM
Feed-in tariff expert, Paul Gipe, looks at how individuals and farmers in Germany are leading the renewables revolution there. A "Citizen Power" conference will be held in the historic chamber in Bonn in July where the world's first feed-in law was enacted in 1991. 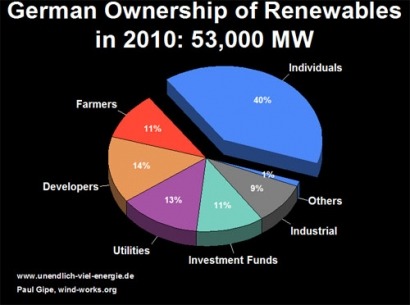 Germany, a country where 51% of the renewable energy generation is owned by its own citizens, will be hosting an international conference on community power from 3 to 5 July 2012 in Bonn, the former capital.

The conference will be held in the historic chamber where the world's first feed-in law was enacted, the former home of the Bundestag, Germany's parliament. The Stromeinspeisungsgesetz, literally the "law on feeding in electricity" (to the grid) was introduced by conservative Bavarian farmers frustrated with their utility's intransigence to connecting their small hydro plants with the grid.

The "feed-in" law was passed overwhelmingly by the conservative government of Helmut Kohl, and quickly ushered in a revolution in the way electricity was generated in Germany, spreading rapidly from Bavaria in the south all the way to the Danish border in the north.

Farmers, individuals and community groups could, for the first time, emulate their Danish neighbours by installing their own wind turbines and selling the resulting electricity at a hoped-for profit. These electricity rebels, Stromrebellen as they're called in German, began appearing all across the country, even in the former communist East Germany.

The Bonn conference is timely. Interest in community ownership of renewable energy generation is increasing not only in Europe but also in North America, following the launch of Ontario's ground-breaking feed-in tariff program of 2009. Ontario's policy specifically encourages community and aboriginal ownership of renewables. Currently 800 MW of projects, a full 20% of all projects in the Ontario program, are under contract, though not yet built.

Nevertheless, potential community ownership in Ontario and the existing 300 MW of community wind in Minnesota pale in comparison to community-owned renewables in Germany.

In 2010, 51% of the more than 50,000 MW of renewable energy capacity in Germany was owned by farmers or individual citizens. This represents a staggering $100 billion in private investment.

Citizen-ownership is a direct translation of the German term Bürgerbeteiligung. Though there is a long history of cooperative ownership in the English-speaking world, the concept of local ownership of energy generation is so novel today that the term "citizen" appears awkward on the tongue. Even in the land of Thomas Jefferson, the word "citizen" has fallen out of favour in preference to "individual".

It is ironic that it is non-native speakers of English who have begun to revive both the word "citizen" and its meaning. Travellers to Germany marvel at how "Jeffersonian" the Bürgerbeteiligung movement has become in democratizing electricity generation, by literally placing power generation in the hands of the people.

German farmers, community leaders and entrepreneurs are not only democratizing electricity generation and renewable heat, but are also setting their sights on an equally ambitious prize, the transmission system itself.

The conference is being organized by the World Wind Energy Association (WWEA) and the German Wind Turbine Owners Association (BWE). Both organizations are long-time supporters of community ownership of renewable energy. Because it represents the thousands of individual owners of wind turbines in Germany, BWE has become the world's largest wind energy association.

With backing by federal, state and local government, the community power conference is expected to attract attendees from around the globe.

"If we want to reach 100% renewable energy supply," says Stefan Gsänger, WWEA's managing director. "We have to ensure that local communities benefit from renewable energy development and support projects in their vicinity. Community- and citizen-ownership models have a proven track record in achieving this objective."

[Editor's Note: This article was provided by Paul Gipe. In 2004, Gipe launched a campaign to bring electricity feed laws back to North America. The campaign has grown into a continent-wide grassroots movement that has put renewable energy feed-in tariffs on the political agenda in Canada and the US. His most recent book, Wind Energy Basics: A Guide to Home- and Community-scale Wind Energy Systems was published in May, 2009.]

Tags: Wind ,Germany ,Renewable energy ,Electricity ,Wind energy ,Feed-in tariff ,Solar ,Wind turbine ,Biogas ,Grid ,PV ,Canada ,Europe ,Hydro ,Photovoltaic
Add a comment
Sergio Arboledas
The German translation is always a tricky one. It reminds me to this webiste http://textappeal.com/clients/mulberry-website-transcreation-emea-regions/ that translated some content for us into German. Literal translation can be unacurate so you might need transcreation.
¡Suscríbete!
biogas