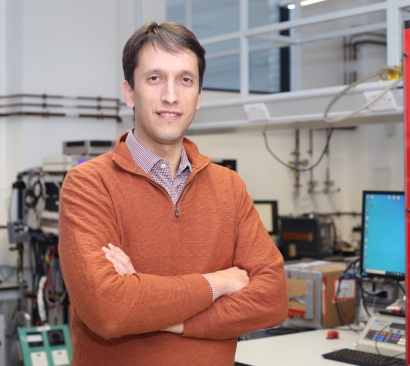 Instead of using refrigerant gases with high global warming potential, Barocal’s technology uses new solid-state, temperature-changing materials. Cheap and non-toxic, these are organic materials that release and absorb heat at different pressures as they change volume. Known as barocaloric materials, they are more efficient than fluid refrigerants. And, as they are solids, they are more environmentally friendly and easier to recycle at the end of a product’s lifetime.

“Heating and cooling accounts for 38% of the UK’s CO₂ emissions,” said Dr. Xavier Moya, who co-founded Barocal based on his research in the Department of Materials Science and Metallurgy. “So the government’s commitment to a 78% cut in carbon emissions by 2035 means there is a growing need for new low-carbon domestic heating systems.”

The £1.3 million investment in Barocal was led by IP Group plc, which focuses on funding innovations to address some of the world’s most pressing challenges.

Cambridge Enterprise participated in the funding as part of a new sustainability initiative. Over the next four years, the initiative will support at least 15 of the University’s spin-outs and start-ups working on technologies that will rapidly cut emissions of global warming gases.

Through its sustainability initiative, Cambridge Enterprise recently joined in a £1 million investment in Carbon Re, a climate tech start-up using artificial intelligence to cut CO₂ emissions in the global cement industry and other energy-intensive sectors.

In 2019, Barocal was the sole European finalist in the Global Cooling Prize—an international innovation competition designed to stimulate invention and production of super-efficient and climate-friendly residential cooling solutions. Established by a coalition led by the Government of India along with the Rocky Mountain Institute, the competition attracted 139 teams from 31 countries.