Monday, 13 December 2021
0
Robin Whitlock
Budweiser Brewing Group, part of AB InBev, has announced that its UK breweries are aiming to have net zero operations in 2026, as part of a new global ambition to achieve net zero across its value chain by 2040. 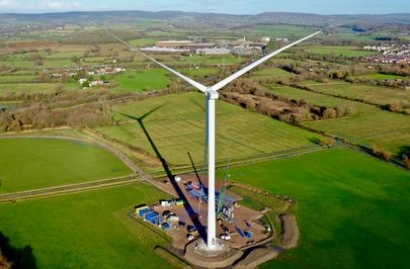 AB InBev aims to brew the world’s most sustainable beers and the brewer has already made significant progress towards its global 2025 Sustainability Goals. Between 2017 and 2020, absolute GHG emissions in its operations (Scopes 1 and 2) have been reduced by nearly 25 percent and value chain emissions (Scopes 1, 2, 3) reduced by over 10 percent per hectoliter.

Its European business is contributing towards the company’s new ambition to have net zero operations in five major breweries in 2028, reducing annual CO2 emissions by 110,740 tonnes, equivalent to the emissions of almost 35,000 cars. The UK business, Budweiser Brewing Group is set to be the first to meet this target with its Magor and Salmesbury breweries.

Budweiser Brewing Group already brews every single can, bottle and keg in the UK with 100% renewable electricity from its own wind turbine and two solar farms. The brewer has also removed plastic rings from its entire portfolio and has met its goal of brewing with 100 percent British-grown barley, reducing carbon emissions and championing local agriculture. Additionally, in September, Budweiser Brewing Group partnered with RUSAL, EN+ Group, CANPACK and ELVAL to launch a pilot to produce five million cans with the lowest carbon footprint for an AB InBev beer can produced in Europe.

However, for the hospitality industry to remain on track to reach net zero by 2050, greenhouse emissions need to be halved by 2030 and for many businesses, that’s a real challenge. With 35 percent of the UK’s greenhouse gases coming from food and drink production and consumption, Budweiser Brewing Group has partnered with Footprint to launch a report today that identifies the challenges the hospitality sector is facing in reaching net zero. They spoke with industry leaders, academics, consultants, investors and business experts from the likes of Coca-Cola Europacific Partners, Pernod Ricard and Sipsmith.

According to the report, a growing number of hospitality businesses have begun preparing for net-zero, however many remain uncertain about where to start. It shows that four approaches have broadly emerged: ignore the net-zero agenda altogether; say nothing until you’re ready but prepare to be criticised in the interim; make pledges that demonstrate engagement with the issue but avoid detail; or get ahead of the pack and position the business as a pioneer with time-bound targets and detailed roadmaps for achieving them. Regardless, the road to net-zero must be addressed collectively as an industry, to better understand the mutual challenges and opportunities that hospitality businesses are facing.

“We are enormously proud that in 2026 our Magor and Samlesbury breweries will be the first to net zero operations in Europe, bringing us one step closer to achieving our global net zero ambition across our value chain by 2040” said Mauricio Coindreau, Head of Sustainability and Procurement, Budweiser Brewing Group. “We are excited to be partnering with Footprint on this report as we believe in the power of collaboration, particularly when it comes to climate change and solving sustainability challenges. As a global business, we know we can make a positive difference and set a good example, which we hope will inspire others to follow and help make significant change for the better.”

Charles Miers, Co-CEO, Footprint, added that the collaboration with Budweiser Brewing Group has provided the company with invaluable insight into the challenges facing hospitality businesses as they join the race to net zero.

“The report has identified that we have a long way to go” said Mr Miers. “It is great to see the commitments that companies such as Budweiser Brewing Group are already making, through their global net zero ambitions and carbon-cutting initiatives throughout the UK.”

For AB InBev, the strategy to support the ambition to achieve net zero operations in Europe is built primarily on switching fuel sources and increasing energy efficiency. The company has identified 29 distinct technologies, that show great promise to contribute to the net zero ambition, and several have already been implemented.

To unlock the potential of green energy, AB InBev’s UK business, Budweiser Brewing Group is exploring the deployment of zero emission green hydrogen at the Magor brewery in South Wales, one of the largest breweries in the UK. This project envisages hydrogen production facilities that will include a battery, hydrogen storage unit and a hydrogen refuelling station used for HGVs.

As well as switching to green fuel, the company continues to investigate ways to make its operations more energy efficient. One example is its "Simmer & Strip" technology, invented in AB InBev's global R&D Centre (Global Innovation and Technology Centre “GITEC”) in Leuven, Belgium. The innovative process provides 80 percent energy savings in the boiling phase of production and reduces brewing emissions by 5 percent. The patent has been shared with smaller brewers.