Thursday, 19 January 2012
0
Toby Price
Investment in education and research and development and an increased focus on emerging markets will define the renewables industry over the coming years, according to leading industry figures who gathered in Abu Dhabi this week for a high-level discussion at the World Future Energy Summit 2012. During the session, Vestas chief, Juan Araluce gave key guidelines specifically for the wind sector. 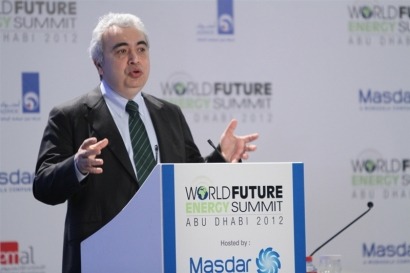 Speaking at the plenary session Business Leaders in Renewable Energy – Insights from the Executive Suite on Tuesday, nine senior figures from the energy sector agreed that 2012 was likely to be a challenging year – but that those challenges could be overcome by a commitment to strategic investment.

Steve Bolze, Senior VP, President and CEO of GE Power and Wind, said that only those companies that invested significantly in R&D and innovation will thrive. "Given the times, technology investment has to be the long-term differentiator in the sector," he said.

Bjorn Haugland, COO of Norway's DNV, agreed, adding that his company is committed to investing 6 to 7 percent of turnover to research and development. "The next ten years is going to be a major transition period," he said. "We need to take the next generation of renewable technology from the drawing board, where it is now, to being fully scaled up."

Steve O'Rourke, Senior VP and Chief Strategy Officer at Sun Edison said the challenge ahead for his company lay not with the science, but with implementation. "When it comes to photovoltaics, the science is already out of the equation," he said. "What we now have is an engineering problem, and that's what we must concentrate on. But, solving that engineering problem is very do-able."

James Brown, President, Utilities Business Group at First Solar said that despite the difficulties the industry is facing, innovation will continue to make renewables more attractive for end-users. "The industry was in chaos last year," he admitted, citing the over-supply in the PV sector, but he added that tech breakthroughs, such as the record-breaking 14.4 percent efficiency in pholtovaltaic modules announced by First Solar at WFES earlier in the day, continue to be made, and will bring the cost of the renewable down further.

Emerging markets in the spotlight

He also said that emerging markets would be a focus for the company, "We have been slightly overweight in developed markets," he said, adding that renewable energy is increasingly attractive for emerging markets as they seek to address long-term energy challenges.

Emerging markets are also on the agenda for Shell as it renews its focus on gas production as a replacement for coal in power plants. Mark Carne, executive VP for Shell International, said the priority of Shell would be gas, the cleanest of fossil fuels. "Last year was the first year in this country's 100-year history that we produced more gas than oil," he told delegates.

He flagged Iraq as a key area for gas development for the company. "700 cubic feet of gas per day is flared off in Iraqi refineries," he said. Shell aims to capture this resource to use for Iraq's internal energy needs. "This is a very exciting project that will make a real difference to the future of Iraq," he said.

He cited the fact that the costs of wind power were now at par with gas, and would catch up with coal by 2015. But he warned that education was not keeping up with growth in the sector. "Talent is simply not sufficient to support growth in the industry, so we need to make significant investments to boost that talent pool."

Jean-Pascal Tricoire, President and CEO of Schneider Electric, outlined his company's four-point plant for 2012 and beyond: connect the company's 40 sites in 25 countries to drive efficiencies of scale; connect the customer base to improve efficiency in transmission, by levelling out peak demands; improve access to energy in areas of operation and, lastly, to boost education in new technologies.

He said that Masdar Power would use 2012 to build on its innovation breakthrough in 2011 – a concentrated solar power generator that harnessed the properties liquid salt to provide power generation 24 hours a day.

"This year we will have the second generation on the drawing board – we see massive potential with this," he said. Wouters added that Masdar will also seek to open new markets. "We need to be agile," he said. "Overall, I'm not particularly pessimistic about the future, but you have to be able to tap into markets as and when required."

Juan Araluce, President, Vestas Mediterranean, also spoke at the Business & Policy Forum Business Leaders in Future Energy – Insights from the Executive Suite about the role that wind can play to deliver sustainable energy for all and what it is needed to make it happen.

Juan Araluce reminded all business leaders and political representatives attending the forum of some of the critical challenges the wind industry is facing nowadays: the current financial crisis affecting the investments in renewable projects, the regulatory uncertainty experienced in mature markets and the green “protectionism” existing in new markets.

The main recommendations presented in Abu Dhabi to support the development of wind energy were the following:

Develop public-private partnerships in countries where the business case certainty is too low to attract private investment, but where there are clear public benefits to be obtained. Provide a stable renewable energy policy and the subsequent regulatory framework. End fossil fuels subsidies in the light of clear economic and environmental benefits. Set a robust price on carbon to send a strong signal to the market, change people’s behaviours and investments’ directions. Enable free green trade eliminating tariff and non-tariff trade barriers to accelerate the green technologies and the development of sustainable energy. Reinforce investments in research and development to favour innovation in renewable and sustainable energy.

“As the wind industry leader with more than 30 years of expertise, Vestas is convinced - and has data to prove it - that wind can be on par with oil and gas,” explained Juan Araluce, President Vestas Mediterranean, who has recently been appointed Global Chief Sales Officer, Vestas Wind Systems.

2012 has been declared by the United Nations the Year of Sustainable Energy for All. The UN Secretary-General Ban Ki-moon declared at World Future Energy Summit that doubling the share of renewable in the global energy mix by 2030 is a very ambitious target but it’s a reachable one.

“At Vestas, we believe that wind energy can play a key role in achieving this objective: it is a mature, free and renewable energy, which provides security of supply, without consuming water or emitting greenhouse gases. Moreover, if all external and operational costs are considered, wind can clearly compete with traditional energy sources – making possible to face both economic and environmental challenges,” he concluded.