Wednesday, 13 February 2013
1
Antonio Barrero F.
More than 40 environmentalists and community leaders from across the country were arrested outside the White House this morning as they staged a protest to urge President Barack Obama to deny the Keystone XL tar sands pipeline and act decisively against climate change. 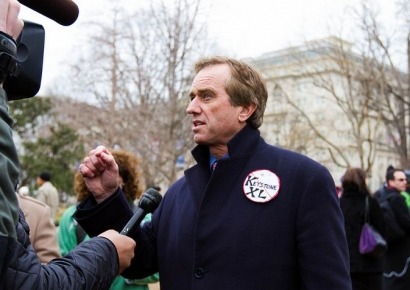 Among those participating in the protest were Michael Brune, executive director of the Sierra Club; Bill McKibben, Founder of 350.org; Julian Bond, former president of the NAACP; Danny Kennedy, CEO of Sungevity; Robert F. Kennedy Jr. and Connor Kennedy, and Daryl Hannah, the American actress.

After blocking Pennsylvania Avenue, near the East Gate of the White House, and refusing to move when asked by police, the activists were arrested and transported to Anacostia Park for processing by the US Park Police Department.

“The threat to our planet’s climate is both grave and urgent,” said civil rights activist Julian Bond. “Although President Obama has declared his own determination to act, much that is within his power to accomplish remains undone, and the decision to allow the construction of a pipeline to carry millions of barrels of the most-polluting oil on Earth from Canada’s tar sands to the Gulf Coast of the U.S. is in his hands.

"I am proud today to stand before my fellow citizens and declare, ‘I am willing to go to jail to stop this wrong.’ The environmental crisis we face today demands nothing less,” Bond said.

In a written statement released prior to the protest, the Sierra Club said, "civil disobedience is the response of ordinary people to extraordinary injustice".

"With creative, nonviolent resistance, our countrymen have corrected the injustices of our society: slavery, child labor, suffrage, segregation and inequality for migrant workers ... Climate change threatens the health and safety of everyone, and the immediate response should be proportionate to the gravity of the situation. the statement continued."

"We are here today to show our deep commitment for President Obama to act immediately and decisively against climate change, and to show that, if the president leads, the vast majority of the public will follow. We are not here to protest against the president. We are here to encourage and support him. We have experienced the horrors of Sandy Superstorm, the terrible drought, huge fires and the warmest year in recorded history. We are fully aware that it is time to do more of what we have done, and all we can do," the Sierra Club added.

The Canadian oil sands, whose appearance, texture and aroma are similar to those of fresh asphalt used for road construction, appear to be the remains of fat seaweed and other aquatic plants that were buried by sediments over millions of years.

The organic material begins to become fat chain hydrocarbon molecules immediately after deposition, with the help of microbes. Over time and through geological processes that increase the depth, pressure or temperature, the organic material is transformed into oil reservoirs, gas and bitumen. Geologists estimate that the oil sands deposits in Canada account for approximately 85% of total world reserves.

While the principal method of oil extraction are the perforations in the crust, the bituminous sand in most cases, is extracted with the aid of large excavators. The process of oil sands extraction begins with the removal of the original forestation, organic soil layer and subsoil. The layers of soil and subsoil of clay and barren sand-laden water away and, in theory, should be retained for their replacement at the original place and recreation topographic contour is extracted after the deposit of bitumen. The oil sand has a thickness of 40 to 60 meters, and is located on a flat limestone formation.

After excavation, add water and caustic soda to the oil sands, and the product is moved to the extraction site, where it is stirred and injected with air bubbles to black oil rises to the surface and can be removed . Then, the bitumen is subjected to refining processes that produce a synthetic crude oil, which was re-refined and processed using various chemical transformations to obtain oil products. It takes approximately two tons of bituminous sand to produce a barrel, about 1/8 of a tonne of oil. [Text taken from P & H MinePro Services, multinational company providing services to mining companies].