Tuesday, 11 July 2017
0
REM
The first mass production of environmentally friendly synthetic crude oil from a power-to-liquid process will become a reality in Norway from 2020. 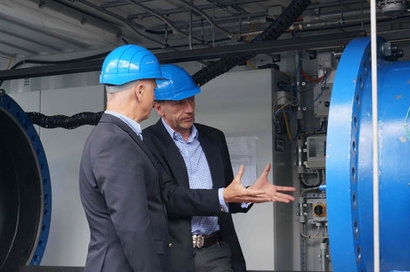 The first plant will begin operating in the industrial park of Heroya in Norway in 2020 with an electric capacity of 20 MW. It will produce 8,000 tons of Blue Crude per year and the firms Nordic Blue Crude AS, Sunfire, Climeworks, EDL Anlagenbau and various other partners have already started the engineering.

Blue Crude consists of various hydrocarbons – making it comparable with crude oil. Refineries will be able to use it as a raw material for waxes but it could also replace petrol, diesel, kerosene and even rocket fuel. Furthermore, around 3,000 products currently made from crude oil could be manufactured using Blue Crude instead, including chewing gum, credit cards, sneakers, smartphones and climate-neutral fuel. It can be employed directly utilising the existing production processes and distribution networks, without any complex renewals or adjustments.

Nordic Blue Crude AS, located in the harbour and industrial city of Porsgrunn, will operate the power-to-liquids plant. It is already marketing the synthetic crude oil substitute to manufacturers of cars, trucks, trains, airplanes and ships as well as to specialised chemical refineries and other customers. The annual production volume would be sufficient to supply 13,000 cars with synthetic fuel, thus avoiding 21,000 tons of CO2 emissions. The target-price per litre lies below 2 euros.

Blue Crude is created in a highly efficient, three-stage process, developed by Sunfire and consists of a patented power-to-liquid procedure employing nothing but water, CO2 and renewable energy. In Norway the continuously available, cost-efficient green energy from hydropower is put to use. The core element is the steam electrolysis process (SOEC) that efficiently splits steam into its components hydrogen and oxygen.

The CO2 is transformed into carbon monoxide (CO) and then the synthesis towards Blue Crude is effectuated. The gaseous CO2, employed as carbon source, is partly extracted on-site from the ambient air by using the Direct Air Capture (DAC) technology, developed by the Swiss company Climeworks. The exploitation of the waste heat from the Sunfire process makes the DAC technology highly efficient.

Just recently Sunfire has produced three tons of Blue Crude in its power-to-liquids demonstration plant in Dresden which was operated continuously, smoothly verifying the operational time of 1,500 hours, vital for industrial requirements.