Thursday, 02 May 2019
0
REM
A low-carbon renewable energy scheme involving the retrofit of ground source heat pumps into 400 flats in eight tower blocks in the London Borough of Enfield has been named District Heating Project Of The Year at the 25th annual H&V News Awards held on April 25 in London. 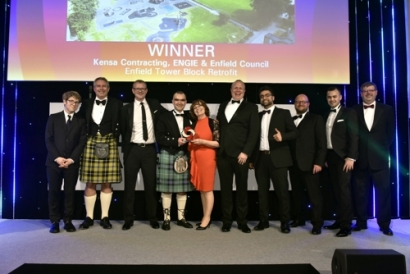 The H&V News Awards, commonly referred to as the ‘industry oscars’, are the longest-running and largest ceremony for the UK’s building services. Competing against projects from GEM Environmental, Vaillant, Vital Energi, and Woodford Heating & Energy, the H&V News Awards judging panel described the Enfield tower block retrofit as, “a clear winner with demonstrable innovation, excellence in installation plus wide benefits to the client and residents.”

The Enfield project stood out for the scale of its ambition. Due to space limitations Kensa removed the need for an energy center, a traditional feature in district heating systems. This was achieved by installing a small ‘Shoebox’ ground source heat pump in each of the 400 flats, rather than a few large heat pumps centrally. The Shoebox heat pumps were connected to ambient temperature shared ground loop arrays totaling 100 boreholes drilled to depths over 200m.

One of the big advantages of a shared ground loop system is that, unlike central plant systems, it is relatively simple to sub-divide district schemes into smaller units. In Enfield’s case, Kensa split the system into 16 “micro-districts” each supplying half a tower block, simplifying project logistics and allowing for parallel work flows, reduced timescales and disruption to tenants.

With each flat having its own heat pump, each property is responsible for its own energy bill, and able to switch supplier; again a common issue with more traditional district heating systems.

The EPC ratings on the properties have improved by an average of 8 points, and the project will save 773tCO₂ per year – a figure which will increase as the electrical grid decarbonizes. As ground source heat pumps are non-combustion devices, there are zero point of use NOx, SOx or particulate emissions; a critical advantage in light of London’s air quality improvement campaign.

Dr. Matthew Trewhella, Managing Director of Kensa Contracting, said, “The H&V News Award affirms this project’s place as one of the most significant and ground-breaking milestones for district heating, ground source technology and the renewable energy industry as a whole. Kensa’s district heating system architecture produces the multiple benefits of reduced fuel bills, energy security, electrification of heat, decarbonization and reduction of particulate emissions. The Enfield project demonstrates that the system can be deployed rapidly and at large scale and represents a blueprint for the future of heating in tower blocks across London and the rest of the country.”