Thursday, 09 June 2016
0
Robin Whitlock
The International Renewable Agency (IRENA) has joined a campaign launched recently to increase the number of companies committed to sourcing renewable energy for their operations. 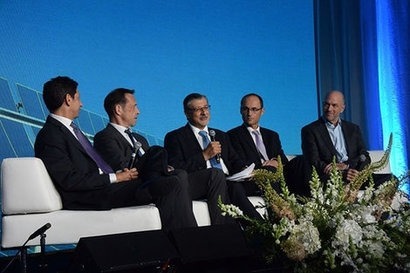 The Corporate Sourcing of Renewables Campaign was launched at the seventh Clean Energy Ministerial (CEM) in San Francisco on the 2nd June and involves governments and private sector corporations collaborating to scale up renewable energy in support of the Paris Agreement. IRENA joins the Renewable Energy Buyers Alliance (REBA), RE100, World Business Council for Sustainable Development (WBCSD) and the World Resources Institute (WRI) as initiative partners.

“The private sector accounts for roughly 50 per cent of the world’s electricity consumption and so must play a key role in the ongoing global energy transition” said IRENA Director-General Adnan Z. Amin. “Switching this demand to renewables will decrease emissions, generate jobs, and deliver a host of other environmental, social, and economic benefits. IRENA looks forward to collaborating with initiative partners to reach this aim.”

A wealth of initiatives have already been announced as part of the campaign. For example, Apple has announced its commitment to work with CEM countries and partners to spur the development and procurement of renewable energy within its global supply chain. The company is working with its suppliers to install more than 4 GW of new clean energy worldwide, including 2 GW in China by 2020. Its supply chain is the single biggest source of carbon emissions, so the company is committing to actively engage with ministers and partners in the US, China and other CEM countries to drive the transition to green manufacturing.

Facebook has announced commitments to fund the REBA initiatives, collaborate to expand REBA internationally, work with REBA to raise awareness and help other companies navigate the complexities of PPAs, work with utilities to develop green tariffs and source 50 percent of their energy from clean energy sources in 2018.

Google will work in collaboration with national governments, renewable energy buyers and suppliers, NGOs and others across CEM members to convene a group of stakeholders to survey the policy and regulatory structures critical to enabling corporate purchasing of renewable energy and make policy recommendations for how to further unlock corporate renewable energy demand in CEM members.

Microsoft intends to draw at least 50 percent of power used by the company’s datacentres from wind, hydro and solar by 2018 and 60 percent early next decade. This is a significant commitment in a sector (IT) that includes some of the fastest growing energy users in the world, consuming as much energy as a small state and in the near future as much as mid-size nations. Microsoft itself is actively working through REBA to deliver on these goals in markets around the world. It has also pledged to maintain 100 percent carbon neutrality on top of this new commitment.