Wednesday, 02 December 2020
0
Robin Whitlock
Plans have been unveiled to construct a large-scale renewable energy park in the north east of Scotland, designed to deliver between 150 – 200 megawatts of green energy to supply to the Scottish grid, with the capacity to power tens of thousands of homes across the north-east of Scotland. 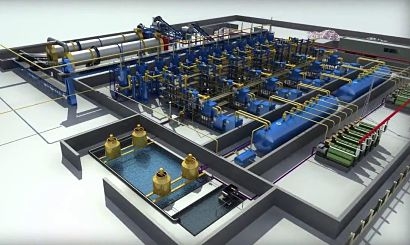 The ambitious, large-scale development is earmarked to be built on a purchased 40-hectare (99 acre) site close to the existing Peterhead Power Station, Aberdeenshire. It has attracted overseas interest from an investment group - North China Power Engineering (NCPE) - who has pledged £800,000,000 (£800million) for the build-out phase.

Holistic Energy has completed a feasibility and evaluation study of what will be the UK’s first Holistic Low Carbon Energy Facility. The feasibility study has produced an outline layout of the facility, the range of technologies to be used and how these will interact, to ensure the best possible efficiency and the lower environmental impact.

Concepts have already drawn up to encompass and integrate several different energy generation technologies. These include a mixed fuel gasification and biomass plant, a green biodiesel production facility and an aerobic digestion (AD) plant. These will be housed alongside solar PV, wind energy, and supported by a green hydrogen production facility  and large-scale battery storage facilities.

As a phase two to the project, Holistic Energy will explore the deep geothermal potential of the site. The company will work with several  partners in the design, civil engineering and construction phases, including Aberdeen-based companies Wood Group and XL Group. Will Rudd Davidson and  Bell Ingram Design.

The backdrop to the proposed Renewable Energy Park in Peterhead is The Scottish Government’s Climate Change Plan which sets out a strategic framework to transition Scotland’s emissions from electricity generation to adopting a low carbon-based infrastructure for its future energy needs.

Dr Gen Cannibal, director of Holistic Energy, believes the complex systems approach to engineering a new renewable energy village will both showcase and utilise the capabilities of interlinked renewable technologies. This will create a multiple technology power station fit for the electricity consumption to usher in a new era designed to consign a dependence on fossil fuel energy to history.

“The facility will have three primary purposes - to produce a local renewable power station in Peterhead which can approach the most commonly identified barriers to renewable uptake, to form a major R&D facility for new technologies that have reached the marketable stage but have not, as of yet, attained large scale market application in the UK and  thirdly, to provide a significant replacement to gas-powered plants in satisfying Scottish electricity demands and, hence, decarbonising the Scottish Economy” said Dr Cannibal. “The ambitions for the development of the Renewable Energy Village are to showcase Scotland and the UK as a world leader in energy transition projects and enhance our delivery timeline to low or zero carbon energy sources.”

Holistic Energy has been planning and developing renewable and conventional petrochemical energy facilities for a number of years. The new Renewable Energy Village is its most ambitious project to date.