Renewable energy brings power to the rural corners of Argentina

Friday, 08 February 2013
0
REM
Cooking, heating water, or the house during winter, reading, listening to the radio, charging your phone, using the computer, watching TV -- most people take these activities for granted in the 21st century, but for thousands of inhabitants in Argentina’s remote rural communities without electricity it is a challenge. 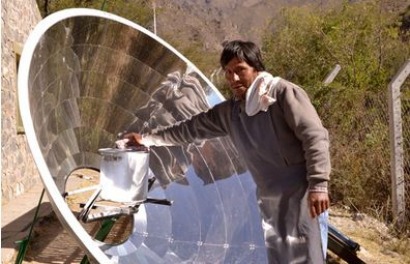 Nearly 150,000 homes still do not have this basic service, most of them in the northern part of the country.

Since 1999, the Renewable Energy in Rural Markets Project (PERMER) has aimed to put an end to this situation. Supported by the World Bank and the Global Environment Facility (GEF), the initiative connects homes and schools to clean energy sources such as solar panels and windmills.

So far, around 25,000 residential customers and nearly 2,000 schools have been reached, and 300 solar thermal stoves, furnaces and water heaters have been installed. Also 2,000 users in small, isolated communities have benefited from small power systems (generation and distribution networks). The project has also included almost 400 public buildings, such as health centers, community centers, as well as Gendarmerie (Police force) and National Parks Administration’s stations.

In PERMER’s proposed scheme, photovoltaic or wind system are installed for the user, who then pays for its operation and maintenance dependent on their means.

"The project ensures that someone is responsible for the proper functioning of the systems at the provincial level, which allows it to be sustainable in the long term," said Lucia Spinelli, Manager of PERMER on behalf of the World Bank.

Many rural Argentineans in 19 provinces found their quality of life improved through access to electricity.

"In the Impenetrable Chaco, the population is very spread out and so solar panels have had a significant impact, as they have managed to supply 14% of users," said Raul Garcia, an Official in the Secretariat of Energy for the Province of Chaco who has been participating in PERMER over the last 12 years.

With an area spanning 12,000 square km of islands, the province of Entre Rios was an ideal candidate to join the initiative. It did so in 2010 and since then, two schools and 850 rural households have received photovoltaic systems.

"The children of fishermen can now go to school twice a week and do chores at home, it is not necessary to travel several miles to buy kerosene and it is much easier to charge mobile phones," said Alberto Alcain, Alternative Energies Coordinator in Entre Rios.

"People have adapted well to technology and began to ask for solar panels instead of electricity lines," asserted Graciela Pedro, who’s in charge of the Alternative Energies office at the Energy Agency of Neuquén.

There, all the rural schools and nearly 2,000 homes have solar panels. "The impact is rewarding. Families have more hours in the day to do their activities, such as women weaving and other crafts," Pedro added.