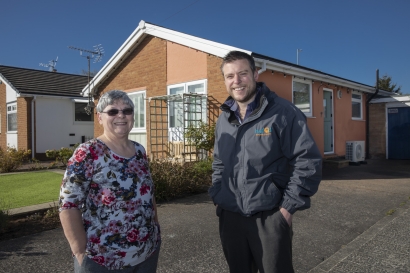 Vale of Clwyd-based Hafod Renewables have had almost 1,000 enquiries in the last six weeks about the new grant 1 and installed their first system within days of the scheme going live on April 1. But with no grant payout available until the end of May Hafod, whose headquarters are in Tremeirchion, are having to absorb that £5,000 cost on each job for almost two months.

The cash is for air, ground and water-source heat pumps and is aimed at domestic systems with a capacity of less than 45 kilowatts.

Air-source pumps, which operate like a refrigerator in reverse, use a heat exchanger that can transform outside temperatures as low as -25C to a balmy 22C and cost from £11,000.

That first system was for a Rhyl couple Norman and Sheila Hobbs who are adding a 10-panel solar system on the roof of their bungalow which will also power the air-source system.

Managing Director David Jones, of Hafod Renewables, said, “We have been inundated with enquiries about the new scheme which is proving very popular and will basically halve the cost of installing an air-source system.

“Before the grant was announced we were getting about five calls a day but that has gone up to over 30 a day, 150 plus a week for the last six weeks, and we’re considering taking on an extra member of staff to help us cope.

“With that volume of work we are happy to bear the short-term cost before the grants start rolling in.”

Sheila Hobbs is delighted with her new system and she and her husband are well on their way to going off grid with an electric Prius car parked on the drive of their bungalow which has the air-source heater on the wall.

The battery on the wall of their attached garage can charge from the solar panels which should ensure that the couple will very soon be off-grid.

She said, “We picked up on the new grant from the Martin Lewis Money Saving Expert program on TV.

“Norman has been reading up on it and has been really on the ball and he contacted Hafod and they sorted everything out for us and were here the first week in April to install it.

“We’ve got the heating which is nice and toasty and the hot water is brilliant – it’s instant. You don’t have to wait.”

The Government scheme, part of its drive to reach Net Zero by 2030 is limited to the first 90,000 applicants with £450 million allocated for the heat pump subsidies over three years.

Jones, whose 14-strong team of installers works across the whole of North and Mid Wales and the border counties of Cheshire and Shropshire, is also covering the lag in payments from the Government which won’t start rolling out until the end of May.

Jones said, “There’s such a big demand we wanted to start work on them immediately and our customers can pay as the grants come through.

“When you install a solar system as well with a battery then you are really covering yourself and saving yourself from paying the electricity and gas prices which have gone through the roof and are set to surge again in the autumn.

“Norman and Sheila are going to ditch the gas completely and save £150 in standing charges alone as they switch onto a single fuel.

“This combined with low maintenance and the long lifespan of the new system which is guaranteed for 25 years, their new air source system will provide an excellent long term investment and will really future proof the Hobbs household.

“The batteries we fit now are slimline, less then half the size of the old Tesla models which were five feet high, three feet wide and eight inches deep, and weighed at over 200 pounds and if you need more storage capacity it’s simple to fit more.”

Hafod Renewables was set up by Jones, a graduate in renewable energy, and his late father, Richard, in 2010 and a decade later the award-winning company covers an area from Anglesey and Gwynedd across North Wales and into Cheshire, Staffordshire and Shropshire.

The business, which last year moved to its own carbon-free headquarters at Tremeirchion, in the Vale of Clwyd, now employs 14 staff and has been crowned Wales’s Renewable Heating Installer of the Year three times.

Since they began they have installed renewable energy systems on a 30,000-bird egg farm, a historic Tudor mansion, builder’s merchants and more than 100 farms, a bakery, the world’s oldest heritage railway, a giant super-school, a rugby club and two golf clubs.