Friday, 26 April 2019
0
REM
The launch meeting of DURABLE was held on April 12 in Bidart, France, with the objective of promoting the development of renewable energies in the Atlantic area including France, Ireland, Portugal, Spain and United Kingdom. The Project has a budget of  €3.9 million and it is co-financed by the Interreg Atlantic Area Program through the European Regional Development Fund. 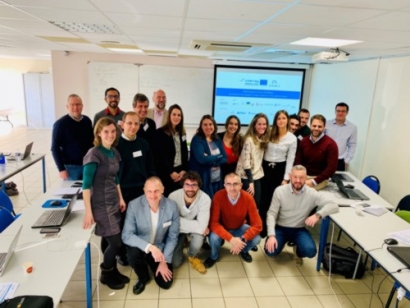 Specifically, the goal of DURABLE is to accelerate the performance of renewable energies through the validation and demonstration of aerospace technologies applied in robotics for operation and maintenance activities of wind and solar energy systems. The application of this technology will automate inspection and repair tasks, reducing costs and favoring production.

This project is led by the Ecole Supérieure des Technologies Industrielles Avancées (ESTIA) of France and it has an important Basque presence, since it includes three Basque partners: Alerion Technologies, Lortek S. Coop. and the Basque Energy Cluster.

The full name of the project is 'Drones and maintenance robots for the promotion of renewable energies in the Atlantic area'. For the first time, this project will apply disruptive aerospace, robotic, non-destructive inspection and additive manufacturing technologies to solve the current challenges in the operation and maintenance of wind and solar energy parks.

The project plans to map the available technologies and the needs in the operation and maintenance of solar and wind energy parks, to adapt them afterward. DURABLE will conclude with the realization of a model and a test of the solution in a pilot project.

The common challenge addressed by DURABLE in the Interreg Atlantic Area framework is the need to change the current paradigm of the renewable energy sector through the transformation of the technological, institutional, industrial and social framework in the Atlantic area.

In fact, the Atlantic region is below the average of the European Union (EU) in the consumption of energy from renewable sources. Countries need to update their renewable energy production technologies to overcome these challenges.

The DURABLE project is formed by a consortium that brings together 10 partners from the five Atlantic countries divided into seven technological centers / universities, two clusters and one industrial partner. In addition, another six associated entities participate through an Advisory Board.

The project partners are as follows: