The Resilient Power of Microgrids: From the South Side of Chicago to Patagonia

Monday, 19 July 2021
0
Access to reliable and affordable electricity is fundamental to social and economic development, but the system that provides this access is facing significant challenges. As awareness of global climate change increases, many fossil fuel applications in transportation, industry, and building heating are being replaced with electricity. As these systems are electrified, the vulnerabilities of the electrical grid are inevitably transferred to other dimensions of daily life. With higher stakes outages and increasingly frequent weather risks, it becomes all the more important that clean energy is reliable energy. 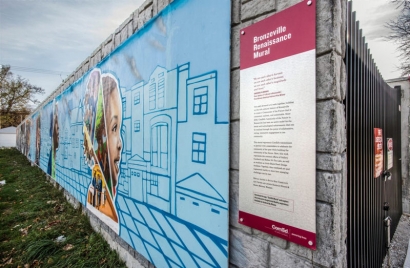 Electric utilities will play a key role in connecting clean and reliable energy to the people who need it. They can do so with existing infrastructure, but the grid will also need to change to accommodate new priorities. One of the changes to the grid that is most promising is the installation of microgrids, segmented electrical distribution networks that can help ensure that electricity is both clean and resilient.

THE RESILIENT POWER OF MICROGRIDS

In northern Illinois, power utility company Commonwealth Edison (ComEd), is demonstrating how microgrids can help communities not only mitigate the effects of climate change but adapt to its worst effects.

ComEd already achieves a high reliability standard, but many forward-thinking companies in the energy sector are carefully monitoring changes that could threaten these achievements. Extreme weather events are blowing through the system. For instance, in August of 2020, a derecho windstorm landed 13 tornadoes, generated 110 mile-per-hour winds, and caused disruptions for 880,000 customers in ComEd’s service territory alone, some of whom lost power for days. It is not possible to attribute any single weather event to completely to climate change, but the threat of climate change promises to make weather less predictable and more disruptive.

Simultaneously, a second feature that American utilities are tracking is the rising complexity of distributed energy resources. In a sense, the responses to climate change may initially pose as many engineering challenges as the disruption that climate change causes. Solar and wind power operate on different schedules in different locations. Adapting power systems to the locations and the intermittency of renewable generation poses a significant sequence of challenges for power systems engineers.

On the South Side of Chicago, ComEd is deploying the first utility-operated microgrid cluster in the U.S. which is proving to be part of the solution to existing tensions in energy systems. Microgrids are portions of the electric grids that can operate either as part of the larger grid, or independently of it. This technology not only supports resiliency efforts, but also represents ways to integrate clean energy technologies like solar power and electric vehicles.

This cluster consists of a microgrid deployed in the historic Bronzeville neighborhood on Chicago’s South Side connected to nearby Illinois Institute of Technology’s (IIT) behind-the-meter microgrid.Connecting two microgrids and allowing them to “talk” to each other is a first-of-its-kind. This innovation is being supported by the U.S. Department of Energy as a way to demonstrate how this technology can increase the integration of distributed energy resources like solar PV. ComEd is also demonstrating with the support of partners as well as the Department of Energy a microgrid integrated solar storage technology to show how solar PV can support the resiliency of the grid.

Simultaneously, this technology is demonstrating enhanced resiliency. The Bronzeville Community Microgrid will serve directly more than 1,000 residences, businesses and public institutions, as well as 11  customers that provide critical public services. Disaster experts have recognized that projects like this could serve as an oasis providing resiliency more broadly during a disruptive event.

To better understand and plan the microgrid’s capabilities, the utility is partnering with Columbia University’s National Center for Disaster Preparedness. Together, they are simulating climate scenarios to assess the microgrid’s design and to identify potential improvements to ensure its reliability during disasters. Experiences like this one can provide valuable insights to utilities and to local authorities abroad, who are looking to follow the blueprint of partnership-driven, community-based efforts. 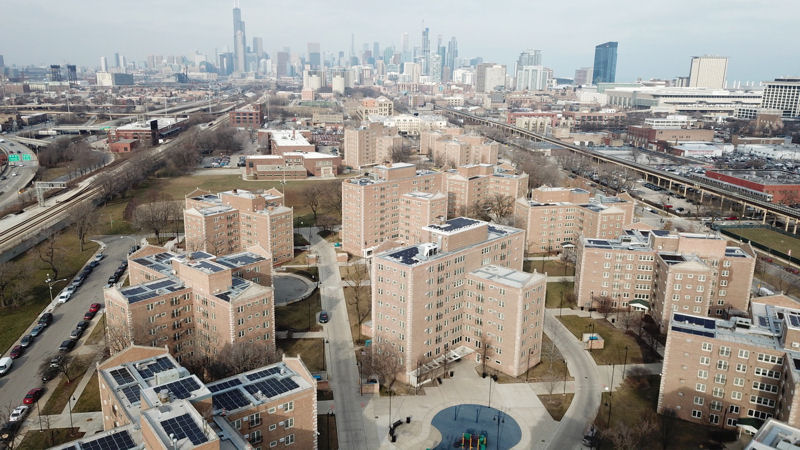 The Bronzeville Community Microgrid is partly powered by a network of photovoltaic panels at Dearborn Homes, a 17-building residential complex in the historic Bronzeville neighborhood of Chicago. Credit: Chicago Housing Authority

The innovation from microgrids can support use cases across the globe. Lying between two mountain ridges in the Chilean Patagonia, the city of Coyhaique is the regional capital of Aysen. Coyhaique is an example of how the resilience and reliability of the energy grid has increasingly become a matter of vital importance for addressing current and future energy challenges.

In 2018 the OMS ranked Coyhaique’s air quality the worst among all cities in the Americas, with the 139th unhealthiest air in the world. The widespread use of low-quality firewood for heating and cooking mixed with a heat inversion phenomenon that compresses the pollution into a valley leading to extremely high concentrations of PM2.5 (fine inhalable particles, with diameters that are generally 2.5 micrometers and smaller), especially during the winter months. In 2020, public health officials declared more than 80 episodes of bad and extremely bad air quality.  According to data from the city’s regional hospital, respiratory issues have been the primary cause of admissions every year since 2016.

National and local efforts to curb pollution have mostly focused on exchanging wood burning stoves and heaters for wood pellet and kerosene devices free of charge, which can actually reduce carbon emissions. However, most of the updated devices rely on electricity to run. Other efforts have focused on reducing energy prices for a select number of subscribers who moved to full-electric heating, regrettably, with low uptake. While Coyhaique’s emissions profile benefits from the low-carbon generation of hydro power plants that account for over 90% of electricity generation, the generation serves an area that spans several hundred miles between generation and large groups of consumers. As a consequence of these transmission distances, there is an increased vulnerability for the system as a whole. In addition, the aging infrastructure has proven unable to withstand the increased frequency of extreme and slow-onset weather events.

Between 2017 and 2018, at least 23% of power outages were weather related (according to the SAIDI Index). On average, weather-related outages lasted more than twice as long as non-weather-related outages. Some neighborhoods in the region experienced more than 26 hours of outages in 2017, but these metrics have been improving since. Despite the pollution, incentives, and personal benefits of cleaner fuel systems, many residents are reluctant to adopt wood fuel alternatives, arguing that no other sources are as affordable and reliable for the long winter months of Patagonia. Unfortunately, high electricity prices and frequent outages prove them right, undermining well-intentioned efforts to clean up residential sources of air pollution. 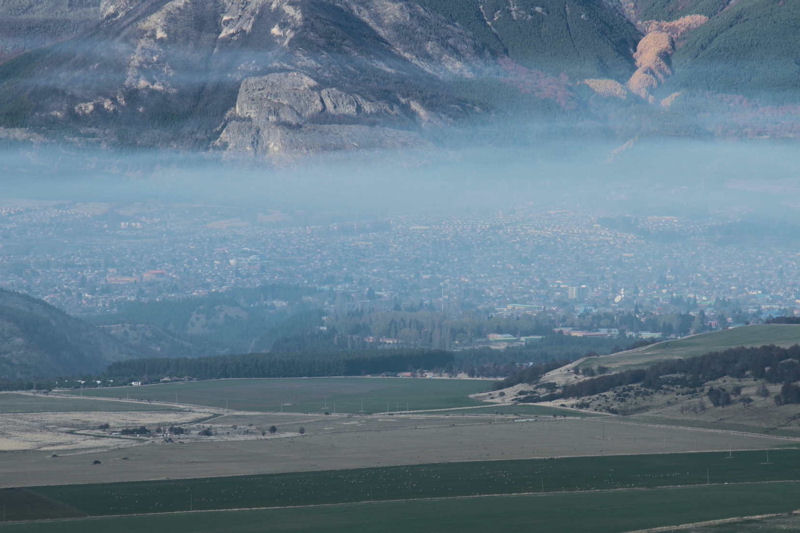 Air pollution in the winter months in the City of Coyhaique, Aysén Region, Chile

The Municipality of Coyhaique aims to remedy the power grid’s weaknesses and to address concerns about how climate change could increase the grid’s vulnerability by mandating an assessment of the vulnerabilities and risks posed by climate change to Aysen’s Electric System (AES) (implemented by Prototype TIMEO Aysen Project). This historical assessment of grid sensitivity and response capacity to extreme climate events and a forward-looking assessment of climate projections and social vulnerabilities of Coyhaique’s population was used as the foundation for a climate change adaptation plan for the local energy system. The plan includes recommendations for building partnerships to deploy distributed generation technologies and microgrids as a way to increase resilience, as well as it highlights the importance of prioritizing vulnerable communities during emergencies.

The well-being of Coyhaique’s population is hanging on the ability of the power grid to prove it can be reliable and affordable and able to support a transition to cleaner energy sources.

Both the TIMEO Aysen Project in Chile and Bronzeville Community Microgrid in Chicago aim to identify the vulnerabilities of the energy system. A community-based approach allows these projects to look inside and outside the grid to search for solutions, taking into consideration historical performance and a broad range scenario planning related to climate, power demand, social vulnerabilities, and grid design.

MICROGRIDS FOR A SUSTAINABLE FUTURE

Another example of technological advancement is microgrid integrated solar storage technology (MISST). To utilize the full capabilities of a microgrid, a group of related technologies need to be coordinated to facilitate reliable power for customers across a changing set of conditions. Batteries can absorb energy from photovoltaics during the cycles when energy is most plentiful and distribute it on the grid when demand is highest. The MISST algorithm can also operate in renewable firming mode to smooth out the variations in the photovoltaics output, mitigating sudden variations due to change in solar irradiance.  As with DLSE, MISST is a candidate technology that promises to make a microgrid and the energy system around it that is much more prepared for a changing environment and energy landscape, in Chicago and throughout the world.

As of July 2021, the Bronzeville Community Microgrid is entering the final stage of development. A vendor for controllable generation has been selected via competitive bid, and the generation will now be integrated with the installed solar, battery, and control systems. When the generator integration is complete, testing on the microgrid controller can be completed and the controller can be commissioned.

The work that goes into designing, installing, and operating a microgrid is highly technical, but the importance of microgrids and other infrastructure goes beyond a technical specification. Looking at these issues from a broader global perspective illustrates the critical role to be played by power companies in addressing some of today’s most compelling global challenges. Five years into the implementation of United Nations’ Sustainable Development Agenda, there is a great deal of work left to be done to achieve the Sustainable Development Goals, both in the global North and South, but power utilities are uniquely positioned to contribute to the achievement of at least 6 of the 17 Sustainable Development Goals, including Goal 7 (Affordable, reliable, sustainable and modern energy for all), Goal 11 (Inclusive, safe, sustainable and resilient cities and communities), Goal 9 (Resilient infrastructure), Goal 3 (Health and well-being), Goal 13 (Climate action), and Goal 17 (Partnerships).

With a keen understanding of the increasingly important role that energy plays in the lives of communities everywhere, innovative and forward-looking power utility companies are uniquely capable of delivering the United Nations’ 2030 Agenda as they foster progress across key dimensions in this global effort. 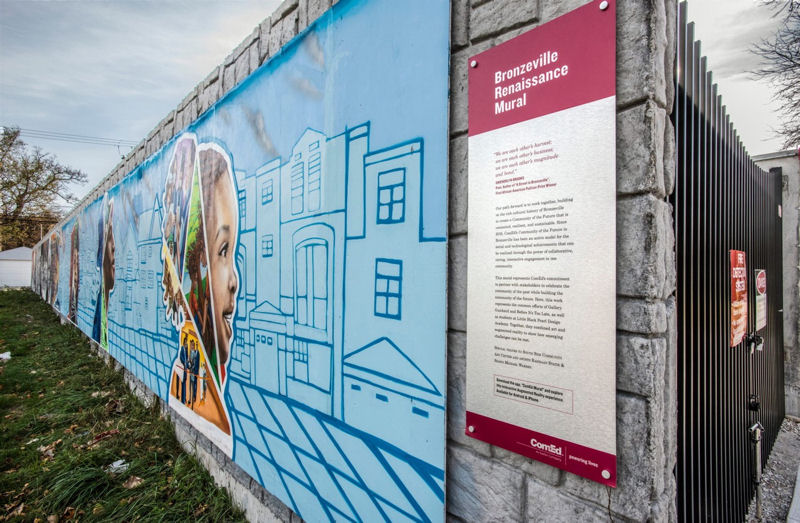 A spectacular 36-meter-long graffiti mural titled Bronzeville Renaissance, featuring portraits of prominent women and men from Chicago's (and the United States’) black community, behind which is the microgrid's battery system. Credit: Lloyd DeGrane

Antonia Samur is a Staff Associate at the National Center for Disaster Preparedness, at Columbia University's Earth Institute, and a consultant at PROVEES Foundation working on the  TIMEO Aysen Project.